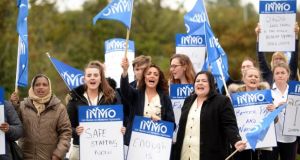 Nurses are making unsustainable wage demands which would compromise public pay and budgetary policy, the Minister for Finance and Public Expenditure has said.

Mr Donohoe said a strike by nurses over pay would negatively affect patients and breach the existing public service agreement. He said nurses’ pay claims would cost €300 million and also lead to follow-on demands by other groups in the public service.

The country’s largest nursing union, the Irish Nurses and Midwives Organisation (INMO) on Monday urged its members to vote to go on strike over pay in a ballot to be conducted over the next three weeks.

Mr Donohoe expressed disappointment on behalf of the Government at the decision of the INMO to go ahead with a ballot for strike action.

The INMO said low pay in the health service was making it impossible to recruit and retain sufficient numbers of nurses and midwives. It said this was placing patient safety at risk, limiting hospital capacity, and contributing to overcrowding.

The INMO said its executive council had recommended that members vote in favour of strike action.

The union said, should the ballot be carried by members, nurses and midwives would stop work for 24 hours. The union said if the dispute remained unresolved, its industrial action would escalate to further 24-hour stoppages. It said its members would provide only a minimum of lifesaving care and emergency response teams.

Minister Donohoe said: “Any such action by front line staff in support of a pay claim will impact negatively on our health services and those who depend on them. The pursuit of cost increasing pay claims and engagement in industrial action are both specifically excluded under the terms of the Public Service Pay and Stability Agreement (PSSA 2018 – 2020) – a collective agreement to which the INMO and its members currently subscribe to.”

“Concession of any such pay claim, which has been costed at up to €300m p.a. would compromise public pay and budgetary policy and would also generate follow on claims from the rest of the public service workforce, where there are already other known pay grievances.”

The Department of Health said the national body which oversees the implementation of the public service agreement had invited management and the INMO to a meeting where each side would put forward their respective positions.

“An industrial dispute in the health service is clearly something which we all would like to avoid.”