Varadkar positions Fine Gael as the party of tax cuts 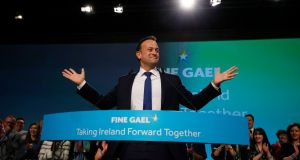 Taoiseach Leo Varadkar’s speech to the Fine Gael Ardfheis was ‘the clearest manifestation yet’ of what he promised he would deliver as Fine Gael leader. Photograph: Nick Bradshaw

When he ran to be leader of Fine Gael, Leo Varadkar told his party that if it stood for everything it would stand for nothing.

“Being all things to all people is the Fianna Fáil way,” he said during one of the leadership hustings. “Do that and we end up being nothing to anyone. We’ve tried it many times in the past and remained in Opposition as a result.”

Initially, those around Varadkar said the public would have a fair idea of where he stood within months of assuming the leadership of the party, but it has taken somewhat longer.

His speech to the Fine Gael Ardfheis, with its centrepiece policy of significantly accelerated tax cuts for middle-income earners over the next five years, is the clearest manifestation yet of what Varadkar promised he would deliver as leader.

The Taoiseach has already identified raising the entry point at which people enter the higher, 40 per cent rate of income tax as a priority. He has shoehorned increases to the threshold into the past two budgets, against some initial opposition from Fianna Fáil.

From next year, the 40 per rate will apply on incomes above €35,300. Varadkar’s promise to increase that level to €50,000 over five years will come at an estimated cost of €3 billion and, on current projections, will leave little if any room for other substantial tax cuts.

As long as the current confidence-and-supply deal remains, Fine Gael’s scope for making much headway on the Taoiseach’s ardfheis pledge is limited. Fine Gael and Fianna Fáil have settled on a budgetary pattern of income tax cuts, split between modest reductions in the universal social charge (USC) and slight increases to the threshold at which people hit the higher rate.

Varadkar’s message – that Fine Gael believes tax cuts allow “you to keep more of your money, they money you earn” – is standard centre-right messaging about the hard-working taxpayer keeping more of their money in their pockets.

And while it is true to himself, it is against the character of the Government he leads which, with the acquiescence of Fianna Fáil, just passed a budget that favoured increasing spending over reductions in taxes on a whopping 11:1 ratio.

A blunt, tax-cutting message did not work for Fine Gael at the last election, when its promise to abolish the USC backfired.

On the evidence of Saturday’s speech, Varadkar believes that the mood of the country has changed since 2016 and that voters may be open to a message now that they rejected 2½ years ago.

Fine Gael’s pitch then was out of tune with centre-ground voters who decide elections. Varadkar may have decided the centre has since shifted.

The party may carve out a more distinctive role for itself, but in doing so will allow others mount a coherent attack on it. It is not difficult to see Micheál Martin, Brendan Howlin, Eamon Ryan, the Social Democrats and Mary Lou McDonald attacking Varadkar in the same way.

Labour’s Jan O’Sullivan even welcomed Varadkar’s speech “because it makes it absolutely clear that FG under Leo is a right-wing party through and through”.

If Varadkar is to be re-elected as Taoiseach, his message must be so successful – and Fine Gael’s victory so convincing – so as to snuff out any prospect of a rainbow of the centre left that could now at least unite in opposition to his policies.

The whole point of Varadkar’s leadership bid was that a more sharply defined Fine Gael would be a more successful one. Staking out political territory at some distance from all other parties and Independents will be the ultimate test of that argument.