Pollution police look to space to monitor over 800 Irish lakes 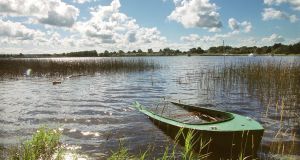 Lough Ree, one of 812 Irish lakes now being monitored from space.

The health of more than 800 Irish lakes is to be monitored from space for the first time using satellites, in a move that could help authorities detect pollution more quickly and in waters that have never previously been tested.

The Environmental Protection Agency (EPA) has described the development as a major step forward in its ability to protect lakes around the country used for drinking water, fishing and as recreational and tourism destinations.

A tender process for a contractor to link up with the European Space Agency’s ambitious €6 billion Copernicus Earth observation programme, which will be launching a constellation of satellites into space until 2030, has been opened by the EPA.

Several of the satellites are already orbiting the Earth, beaming back real-time information on the environment on land, sea and up in the atmosphere.

The EPA believes a pair of recently-launched satellites, known as the Sentinel 2 mission and which pass over Ireland every two to three days, will help them determine the water quality of 812 lakes across the State and detect any changes.

Until now, only about a quarter of these have been actively monitored, using the age-old method of pushing a boat out into the water, taking a sample in a bottle and bringing it back to a laboratory for testing.

These are the largest lakes and make up about 80 per cent of the State’s total lake water.

Gary Free, an aquatic environment expert with the EPA, said the new technology would not entirely replace the traditional testing methods, but should help them monitor many lakes which currently go unchecked because of cost constraints.

“It is fascinating the images you get back,” he said of the real-time pictures beamed down every time the satellites pass over the State.

“The main thing for us is the layers and layers of information – all the different wavelengths – are reported back by the satellites. It is not a simple snapshot, there are layers of data within it. It can tell you an awful lot about the environment.”

This includes information about macrophytes – or aquatic plants in the lakes – which are a key indicator of the water quality.

“It can also help teams locally detect where there might be pollution issues ongoing and help them direct resources to investigate and find where the source of the pollution is coming from,” Mr Free added. “We just wouldn’t have the capacity to do that in any other way.”

The first results are expected by the start of next year, and will determine if further investment in the project is worthwhile.

“We did a small pilot study, looking at the comparisons of results from space and from the traditional testing methods,” Mr Free said. “We wouldn’t have gone ahead with this, only we got encouraging results.”