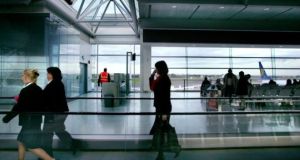 The move would mean that some EU citizens would not enjoy full freedom of movement within the bloc. Photograph: Kate Geraghty

Some EU citizens could be prevented from travelling to Ireland after Brexit so as to ensure they cannot travel on to Britain unnoticed.

The move would mean that some EU citizens would not enjoy full freedom of movement within the bloc as the Irish authorities would effectively prevent them moving on to Britain if their UK counterparts deemed them suspect or unwelcome. The measure is being actively examined by officials in the Irish and British governments.

For example, in the case of a French citizen deported from Britain to France; under current arrangements they could decide to travel to Dublin and from there back to Britain. Their deportation from Britain to France would not currently curtail their right to travel to Ireland at any time. Once in the State they could travel to Britain, very likely unnoticed, because there are no immigration checks when moving within the Common Travel Area between Britain and Ireland.

However, the officials are now working on a mechanism to ensure people unwelcome in, or banned from, Britain cannot use Ireland as an easy way to “sneak into Britain” after Brexit, according to security sources in Dublin.

“We will need to have a mechanism that restricts the freedom of movement of a person like that travelling to the Republic with the intention of travelling on to Britain,” said one senior security source.

Government sources who spoke to The Irish Times agreed, saying the ability to block selected EU nationals travelling from the Republic to Britain would be required to protect the long-term future of the Common Travel Area. The best way of doing this, they believe, would be to prevent those people ever entering the State via a port or airport.

“We are looking at developing watch lists,” said one Government source. “People on these lists would be strictly not permitted to enter Britain.

The Government believes watch lists can be combined with advance passenger lists to identity those who such a measure would apply to.

Sources said if Britain wanted to put in place further controls such as passport checks for those arriving in Northern Ireland or Britain from the Republic, that would be a matter for the British authorities alone.

The draft agreement for the United Kingdom’s withdrawal from the European Union, published last week, envisages no restrictions being placed on the Common Travel Area.

British and Irish passport holders could continue to travel between the two countries as if they were one, and citizens from all other EU states, and their relatives regardless of nationality, would use the Common Travel Area in the same way.

However, they said it was important that any person who needed to be stopped from entering Britain via Ireland would be identified and blocked.

The draft agreement says of the Common Travel Area: “The United Kingdom shall ensure that the Common Travel Area and the associated rights and privileges can continue to apply without affecting the obligations of Ireland under Union law, in particular with respect to free movement for Union citizens and their family members, irrespective of their nationality, to, from and within Ireland.”