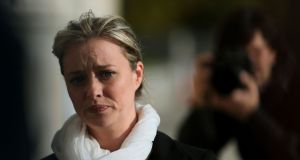 Maíria Cahill, above, and two other women alleged they were sexually abused by IRA member Martin Morris when they were in their teens. Photograph: Brian Lawless/PA Wire

The North’s Public Prosecution Service, which mishandled the investigation of rape allegations made by Maíria Cahill, has improved its performance but “further work” is required, the North’s criminal justice watchdog has said.

However, the chief inspector of Criminal Justice in Northern Ireland, Brendan McGuigan, expressed concern that staff in the prosecutor’s office are not showing sufficient empathy when dealing with alleged rape victims.

He was asked to carry out a review after NI’s Director of Public Prosecutions Barra McGrory QC apologised to Ms Cahill and two other women over how the office dealt with allegations that they were sexually abused by an IRA member.

Mr McGrory issued his apology in 2015 following an independent review by Sir Keir Starmer QC found the three women were “let down by the PPS and counsel”.

Ms Cahill and two other women alleged they were sexually abused by IRA member Martin Morris when they were in their teens in the late 1990s.

Ms Cahill also alleged that four other IRA members had “interrogated” her about her claims, and that on one occasion she was forced to face her alleged abuser so that the IRA could test who was telling the truth.

The cases against Morris and against the four alleged IRA members who allegedly questioned her – Padraic Wilson, Seamus Finucane, Agnes McCrory and Briege Wright – effectively collapsed when Ms Cahill withdrew her evidence. All five were acquitted.

Sir Keir, now a British Labour MP, made nine recommendations to improve the handling of alleged rape cases, including the need for better training about how to deal with victims and witnesses and on the prosecution of cases.

Mr McGuigan was asked to report on the implementation of the recommendations. Four had been fully achieved; four had been substantially progressed, along with limited progress in one.

There were inconsistencies about the quality of record-keeping, McGuigan’s inspectors found, while the quality of letters sent by the prosecutor’s office to victims varied.

Saying that there “some excellent examples” of empathetic, easy-to-understand letters, “just under half of the correspondence” inspected was judged not to “be sufficiently empathetic”, he added.

Mr McGuigan said the establishment of a serious crime unit within the PPS to deal with the most serious cases including murder, manslaughter and sexual offences was encouraging.

“I welcome the steps taken to date to meet the requirements of the Starmer recommendations but I believe the PPS is on a journey which is not yet complete,” he said.