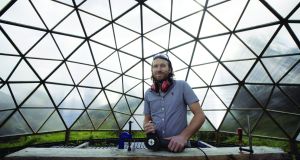 The award has been described as potentially “transformative” by Niall O’Brien, one of the community activists involved in the grow dome project.

The first grow dome in Ireland which includes a space for the local community to gather has been selected as one of the social entrepreneur projects of the year.

Seven projects were selected by Social Entrepreneurs Ireland for the awards.

The geodesic grow dome, which was erected in September 2014 in Dublin’s Liberties, is a 100 metre square installation that is used both to grow plants and to be a focal point of the community.

The dome grows lettuce, microgreens and herbs. It provides for community meetings such as a mother and baby group every Wednesday morning and for school tours.

The project was awarded €10,000 in cash and €15,000 in extra mentoring and supports at the Social Entrepreneur Ireland awards in the Mansion House this week.

The award has been described as potentially “transformative” by Niall O’Brien, one of the community activists involved in the project. “We can take this to the next level. It’s exactly what we need right now.”

The team are building a replica in the grounds of Dublin City University (DCU) and would like to spread the grow domes nationwide.

A housing co-op, which built the only affordable housing scheme in the State for the last five years , was also chosen for funding.

Ó Cualann is now in discussion with Dublin City Council about two further sites in the Ballymun area for co-operative affordable housing.

Chief Executive Hugh Brennan said the money they won will give them the opportunity to develop this model of building houses. “We’re delighted to have won. The recognition makes a huge difference to us,” he said.

Other projects which have won include STEAM Education, a programme to bring STEM subjects and the arts into the classroom; Sailing Into Wellness, a therapeutic sailing programme for vulnerable groups and the Green Garden Kitchen and Café - which supports people with intellectual disabilities to find meaningful employment.

Education DESTY - an online programme to support children with additional emotional needs and The Shona Project - a programme of supports for young girls also secured funding.

“We look for people with innovative approaches to tackle the issues that are affecting Irish people across the country and we give them the support to scale their impact and effectiveness”.

1 Astronaut Chris Hadfield offers to ‘talk space’ with Adam from the Toy Show
2 Ireland in precarious position as third Covid-19 wave could be more deadly, Nphet warns
3 Man dies, five other injured after building collapses in Tralee
4 Covid crisis: Republic to move back to Level 3 as shops open from Tuesday
5 Man arrested over murder of mother and her two children
Real news has value SUBSCRIBE