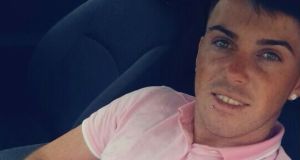 Young gay Travellers are entering arranged marriages because they do not want to shame their families, according to a 22-year-old Traveller who spent years covering up his own sexual orientation.

Tullamore-based Darren Collins who will address a conference, “Travellers And The Importance Of A Healthy Mind”, in Sligo on Monday, said he knows a number of gay Travellers who died by suicide because they could not talk to anyone about their sexuality.

“Suicide is not the answer,” he stressed. It was hard for young people to speak about homosexuality within the Traveller community as it was still such a taboo subject but, he said, it was important for gay Travellers to realise that there were organisations which can help.

Raised on a halting site in Edenderry, Co Offaly, the campaigner said at school he was bullied because he was a Traveller and because he was gay. “You’d hear people saying ‘don’t hang out with the knacker’. And people called me ‘faggot’ and ‘queer’ even though I did not even know then that I was gay.”

He was 18, had recently been diagnosed with epilepsy, and was struggling with depression, when he realised that he was gay. “I could not accept it,” he said. Afraid to tell anyone, he took an overdose, and after a second act of self-harming, was referred to psychiatric services where he was urged to tell his family.

“My dad said: ‘You are my son, I still love you. Nothing is ever going to change. You are who you are’.” His mother took a little longer to come to terms with the news.

“She said ‘I thought you were going to bring home grandkids . . . Will you have to leave Tullamore? Are you going to be beaten up?’ A mother always worries. But after six or seven weeks she accepted it and three years on, she still supports me in every way she can.”

Mr Collins said that after coming out he felt that a burden had been lifted. “I felt like I was flying high. I am off my anti-depressants. There is hope for everyone.”

He appealed to young Travellers to confide in someone. “Your family may not accept it immediately but they will down the line. You are not alone. There are people who will help. I will stand by anyone in this situation.”

He admitted that the reaction he got from other Travellers had been mixed. “I’d say 50 per cent are good and will support you but there are 50 per cent who when you walk down the street will say ‘there’s the faggot who was on television’. But at the end of the day it only makes me stronger. Don’t get me wrong it is hurtful at times. It can upset you.”

Jamie Murphy from the Sligo Traveller Support Group (STSG) which is organising Monday’s event in conjunction with World Mental Health Week, said the issue of suicide in the Traveller community was now an emergency situation.

“The figures are really shocking,” said Mr Murphy who called for more funding for organisations like the STSG which are well placed to reach vulnerable Travellers. “Figures show that only 41 per cent of Travellers say they trust health professionals, compared to 83 per cent in the general community,” he said.

Mr Murphy acknowledged that there is a mental health crisis in the general population but said it was exacerbated for Travellers because of issues like lack of accommodation, lack of education, unemployment and discrimination.

Mr Collins said Travellers who have experienced discrimination all their lives discriminate against gays in their own community. “They need to be educated. Travellers leave school early,” he said.

The Sligo conference will also be addressed by Fr Peter McVerry who will highlight the impact of homelessness on mental health, and by representatives of the HSE and Exchange House Ireland National Travellers Service.

* If you have been affected by anything in this article, help and support is available from the Samaritans on freephone 116123, or email jo@samaritans.org