‘What is Ireland doing putting Che Guevara on a stamp?’ 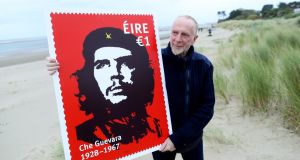 Artist Jim Fitzpatrick with a promotional image of a stamp featuring his world famous image of Che Guevara.

A prominent Cuban-American radio host is calling on An Post to explain why it decided to put Che Guevara on a stamp.

Ninoska Perez Castellón, a prominent member of the Cuban exile community in Miami, told RTÉ’s Morning Ireland that people have been complaining that Ireland would “celebrate a man who slaughtered so many people.”

The €1 stamp features a famous image of Guevara, a leading figure in the Cuban revolution, by Dublin artist Jim Fitzpatrick.

His father was Ernesto Guevara Lynch, a civil engineer of Irish descent.

A quote from Ernesto, “in my son’s veins flowed the blood of Irish rebels”, features on a cover envelope to accompany the stamp.

Ms Perez Castellón said it did not matter that the stamp was an iconic artistic image, it represented “a man who went to Cuba to kill and failed in everything he did.”

Ms Perez Castellón added that there were many families in south Florida whose fathers had been killed by Che Guevara.

His profile was a “propaganda myth created by communism”, she said.

When it was pointed out to her that American president Andrew Jackson’s image is used on the $20 bill and he had a controversial history, she replied that he had not been a terrorist.

“I don’t know what people find to celebrate about Che Guevara.

“I’d love to see that stamp abolished. What reasons did they have to put Che Guevara on a stamp?

“What does Ireland think they are doing putting Che Guevara on a stamp?”

Ms Perez Castellón pointed out that three weeks ago Aer Lingus had to remove advertisements at Miami International airport featuring Che Guevara among figures of Irish descent because of objections from families.

Mr Richmond wrote to Minister for Communications Denis Naughten asking for an explanation behind the “terrible” decision.

He asked if Pol Pot, the communist Khmer Rouge leader in Cambodia, and Romania’s Nicolae Ceausescu would also be acceptable for special stamps.

In his letter to Mr Naughten, he queried “what procedures were followed to decide to commission this stamp”.

“Although Che Guevara seems now to be classed as a romantic revolutionary figure and that some of his political ideals might be shared by some in this country, it is my belief that he is most definitely not a suitable candidate for such an honour,” the letter from the Senator, who is based in the Dublin Rathdown constituency, said.

Asked about the controversy over Guevara appearing on the stamp during his State visit to Australia, President Michael D Higgins said: “I think it is a very, very good discussion if people would discuss Latin America. Every time we have a debate about Latin America it helps understand.”

Who was Che Guevara?

Guevara divides opinion in Cuba like he divides opinion across the world. To the Castro government, he is one of the leaders of the revolution, a worldwide icon for the dispossessed.

The Cuban president Raúl Castro attended a mass rally on Sunday at the Che Guevara Mausoleum in the town of Santa Clara, 300km east of Havana, to mark the 50th-anniversary of Guevara’s death.

Guevara was killed while attempting to organise a coup in Bolivia. His body was brought to Cuba in 1997 and is housed in the mausoleum.

For others, especially Cuban exiles, Guevara is a hate figure, a symbol of a murderous regime.

They hold him principally responsible for the execution of hundreds of prisoners after Fidel Castro overturned the Batista government in January 1959.

Castro is known as the Butcher of La Cabaña, the prison where the opponents of Fidel Castro’s government were taken after the revolution.

One priest, who was a chaplain at the prison, said he witnessed 55 executions and was so appalled by the spectacle he had to leave.

Opponents of Guevara point to a comment he himself made before he died about the ruthlessness needed to foment a revolution: “To send men to the firing squad, judicial proof is unnecessary. These procedures are an archaic bourgeois detail.

“Hatred as an element of struggle; unbending hatred for the enemy, which pushes a human being beyond his natural limitations, making him into an effective, violent, selective, and cold-blooded killing machine. This is what our soldiers must become .”