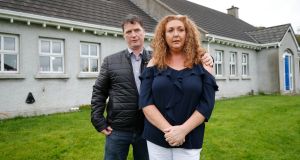 Seán Phillips and his wife, Norma: “We told these men that this guy was threatening to kill our family, our kids,” Mr Phillips says. “We definitely think the Garda saw Crevan as ‘don’t touch’. Photograph: Nick Bradshaw

The family of a young woman seriously injured in the same incident in which Garda Tony Golden was murdered two years ago today, are demanding a “full public inquiry” into the events leading to the shootings.

Siobhán Phillips was seriously injured in Omeath, Co Louth, on Sunday, October 10th, 2015, after her partner, Adrian Crevan Mackin, shot her, Garda Golden and then himself. Both he and Garda Golden died at the scene.

However, the family of Ms Phillips now say gardaí refused to take a statement from her the day before the triple-shooting about a violent assault by Crevan Mackin on her, and threats to kill her and her family.

Crevan Mackin, they argue, should have been arrested the day before and believe reports that he was a Garda informer were central to the apparent refusal of gardaí to take a statement about him.

Now, the Phillips family have urged that all gardaí be given more training on how to deal with domestic abuse cases, and dealing sensitively with those who suffer at the hands of partners.

So far, Ms Phillips has spent six months in Beaumont Hospital, Dublin. The bullet wounds inflicted by Crevan Mackin have left her needing plastic surgery. Her recovery is continuing.

Her father, Seán Phillips, says he knew Crevan Mackin was “bad news” when he met him some years before, but that he heard first about the domestic violence only on the day before the shootings.

On the Friday night, October 8th, Crevan Mackin subjected Ms Phillips to a sustained assault over a 10-hour period, during which he punched her face, cut her wrists and thighs with a steak knife.

He kneed her in the ribs, pulled her head back by her hair, pinned her against the wall, threw her to the floor and kicked her several times in the head. He also threatened to kill her and her family.

On Saturday, she went to work in a hairdresser’s just across the Border in Newry, Co Down. Colleagues saw her bruised face, asked what happened and she broke down and told them.

Mr Phillips’s wife, Norma (not Ms Phillips’s mother), went to collect her and brought her back to their home, where they live with their two young children. “I saw Siobhán and I was shocked,” she said.

He, his daughter and Norma drove to Dundalk Garda station. Crevan Mackin was on bail at the time, facing charges connected with dissident republican activity and had to “sign on” at Dundalk station.

“We were landing in with Siobhán black and blue. We were expecting to be brought into a quiet room. There was one garda at the counter. As soon as we mentioned Crevan Mackin everything shut down.

“ I didn’t even know what he was on bail for. I said: ‘Get him up on your system.’ He did and he says, ‘Oh I couldn’t take a statement on that here . . . You need to get medical treatment for that girl.”

He says they demanded that a statement be taken, explaining that Crevan Mackin was “threatening to kill us and we needed help”, but this was “just refused”. They left “baffled” and went to Daisy Hill Hospital in Newry.

A PSNI officer called to the hospital could not believe the Garda would not take a statement, or arrest Crevan Mackin. They left Daisy Hill at about 11.30pm, by which stage Ms Phillips’s anxiety was “through the roof”.

They drove to Carlingford Garda station. En route they flagged down a passing Garda car and told them of their fears, but they were told to make a statement in Omeath the following day.

They returned to the family home near Newry. Crevan Mackin’s car was later seen nearby. Later, gardaí found 700 rounds of ammunition, another gun and two pipe bombs in Crevan Mackin’s home. “It could have been a massacre,” he said.

“Myself and Siobhán drove up in my car and Tony Golden drove up in his car. As we turned around the corner she says, ‘Oh shit, he’s here.’ His car was there. And I said, ‘Don’t worry, pet, he can’t hurt you any more.’

“Because we had a garda with us we thought we were safe. When they went in I was still sitting in the car with the window down. I could hear every word. I heard Siobhán walk up the stairs.

“Crevan Mackin tried to have a conversation with her. Siobhán says, ‘I’m not talking to you.’ Tony said, ‘Siobhán is here for her stuff.’ Siobhán was up the top of the stairs, on the landing.

“I was outside the door. He didn’t turn the gun on himself immediately. I nearly went in the door of the house but gut instinct told me, ‘If I go near, I’m next’. So I started running.” Mr Phillips ran into a neighbour’s back garden.

“I was banging on the patio doors. There was a woman with a new baby. I scared the living daylights out of her, the poor girl. She thought I was robbing her.

He called 999: “We probably waited 20 minutes before anyone came near the place . . . I didn’t know if Siobhán was lying dead at this stage,” he told The Irish Times.

“The other guard from Omeath arrived up then and went in. I knew something was seriously wrong when he came out. He just put his hands on the bonnet of the car and just threw his radio at the windscreen.

“To him, his colleague was dead. Siobhán was dead. He walked into a horrific scene,” he went on, “They worked on her the whole way in the ambulance. A Garda kept her going until an ambulance came.

“She’s doing remarkably well. She can walk and talk. She has a brain injury, but considering all she went through. She has a lot of plastic surgery to go through. She’s coming to terms with her injuries.

“All of this could have been completely avoided – Tony Golden murdered, Siobhán attempted murdered, our lives put at risk – if people had done their job. But 100 per cent no one was heeding or listening to us.

“We told these men that this guy was threatening to kill our family, our kids,” he told The Irish Times. “We definitely think the Garda saw Crevan Mackin as ‘don’t touch’.

“Normal citizens should be protected. Crevan Mackin shouldn’t have been out on bail in the first place. I understand the Garda need informers but at the risk of other people’s safety?”