People of different traditions ‘can be united by our common rights’, SDLP leader says 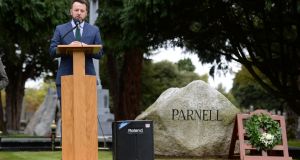 Politicians must demonstrate the same level of courage as the leaders of the civil rights movement half a century ago to ensure that powersharing government is restored in Northern Ireland, SDLP leader Colum Eastwood said in Derry on Thursday evening.

Mr Eastwood said that “just as in 1968, the job of this generation is to break free from the deadlock with which we are now faced”.

“At the heart of that challenge is the understanding that we may be a people divided by history but we can be a people united by our common rights.”

Mr Eastwood was speaking at a civil rights commemorative seminar at the Glassworks in Derry on Thursday. It is a part of a series of events being held by the SDLP to mark the 50th anniversary next year of the first civil rights marches in Northern Ireland in 1968.

“As politics in the North once more retreats into old trenches and divides into old battles, the establishment of the Civil Rights Association offers a reminder that it is possible for politics to be united in the pursuit of the common good,” he said. “That coalition for change was possible 50 years ago and it remains possible now.”

“It is important to say at this point that I fully and freely acknowledge that the anniversary of the civil rights movement in the North belongs to no one individual and to no one political party,” he said, adding that it has “a special place in the life of the SDLP”.

“It was a Stormont administration backed up by a British government in London who deliberately designed a political state giving them the free reign to do so.”