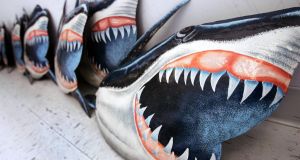 A young man wearing a shark suit has been given a citation under Austria’s ‘burka ban’ law. File photograph: Spencer Platt/Getty Images

A young man wearing a shark suit has been given a citation under Austria’s “burka ban” law.

The country has a law that forbids any kind of full-face covering, including Islamic veils.

Austrian police issued a citation on Monday after the man, who was part of a street advertising campaign for the McShark computer chain, refused several requests to take off his shark head.

From this month, most full-face coverings are prohibited in public in Austria, including off-slope ski masks, surgical masks outside hospitals and party masks on the street.

Popularly known as the “burka ban”, the law is mostly seen as directed at the clothing worn by some conservative Muslim women.

Violations carry a possible fine of €150.

Only a handful of citations have been issued.