‘Viciousness’ of Irish Civil War should be examined - President 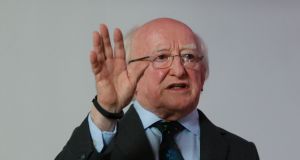 President Michael D Higgins has called for a thorough examination of the ‘viciousness’ that was unleashed in Ireland’s Civil War. Photograph: Nick Bradshaw.

President Michael D Higgins has called for a thorough examination of the “viciousness that was unleashed and the terrible price that was paid” for what happened to both sides in Ireland’s Civil War.

He said there must be an “abandoning of any kind of bogus amnesia” in the State when it comes to remembering the conflict.

Mr Higgins said the atrocities carried by both sides in the conflict must be examined in their proper context.

“It is something that we must face in ourselves,” he told RTÉ Radio 1’s The History Show.

The Civil War occurred between June 1922 and May 1923. The struggle between those who supported the Anglo-Irish Treaty of December 1921 and those who opposed it was characterised by tit-for-tat killings and vicious reprisals. The Irish Free State’s National Army eventually put down the Anti-Treaty forces but the war left a legacy of bitterness which endured for generations afterwards.

Mr higgins suggested the 81 executions carried out by the Free State should be re-examined along with the internment of 459 women by the government.

The “appalling cruelties” done to those accused of being informers by the anti-Treaty side should be included. He also suggested that the departure of so many Protestants from the new State should be examined in a scholarly way.

“There is no doubt whatever that horrific actions took place, but equally we cannot make a blanket condemnation of all of the members of a particular unit. It requires patient and good scholarship.”

Mr Higgins’ family was divided by the Civil War. His father John took the anti-Treaty side and was interned in the Curragh at a camp called Tintown. He also had to leave Co Clare and lost a good job as a travelling salesman.

The President said men like his father were shunned by a lot of employers and could only survive by being self-employed. “There was a brief spell when things went very well for him and then his health broke down,” he said.

Mr Higgins’ uncle Peter, who brought him up, was an officer in the National Army which supported the Treaty.

One of his aunts sided with his father and another aunt took a neutral stance. Both of his aunts tried to smooth out the difficulties in the family over the Civil War.

President Higgins said the war had “destroyed warm relationships between people” especially between his father and uncle.

“We have to deal with the circumstances of all of this, but we have to move on.”

The President intends to give a speech on his Australian tour about the concept of what he calls “ethical remembering” and how it pertains to both Australian and Irish history.

He defines ethical remembering as putting oneself in the shoes of another and allowing for different narratives to be explored .