No upside to Brexit for Irish farmers, Michael Creed says 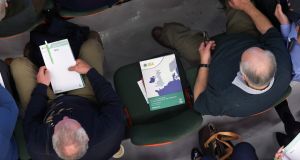 There is no upside to Brexit for the Irish agrifood industry, Minister for Agriculture Michael Creed has warned.

Mr Creed told farmers that Brexit was not a “pretty picture” and that the department was very worried that the UK will fill up its supermarket shelves with cheap food from outside the EU.

A hard Brexit, which would see food tariffs being imposed, would cost €700 million a year and “decimate” the industry, he maintained.

Speaking at the IFA Brexit forum in Goffs, Co Kildare, Mr Creed said there might be some upside to Brexit in the financial service sectors or in getting EU agencies to relocate to Ireland, but there was none for farmers

“You can’t make a banker out of a west of Ireland suckler farmer,” he pointed out.

He announced a seven-point plan to find alternative markets for Irish food and drink exports.

The plan will be implemented by the Department of Agriculture with significant input from Bord Bia and Irish embassies around the world.

It is targeting areas such as China, southeast Asia and the Middle East.

However, he also stated that the best markets for Irish food products were mature western European markets and most specifically the UK.

“It would be difficult to replicate a market as rewarding as the United Kingdom market,” he said.

Exports to Britain account for 37 per cent of all Irish agrifood exports worth more than €4.1 billion.

The weakening of sterling after Brexit wiped off €570 million worth of exports for the industry in 2016.

Mr Creed said it was not time to “raise the white flag” on food and drink exports to Britain. “We are not walking away from the hard won yards on the UK supermarket shelves,” he said.

Speaking at the same event, IFA president Joe Healy said the threat to Irish agriculture posed by Brexit was “stark”.

He urged EU commissioner Phil Hogan, who was present, to ensure that Irish interests are to the forefront in the Brexit negotiations on trade.

He said any trade deal cannot be undermined by allowing the British to import food from countries outside the EU which do meet EU standards of food safety.

“Any free trade agreement must include the maintenance of European standards and the UK’s acceptance of the European Common External Tariff to protect the UK market against low-cost imports from outside the EU,” Mr Healy said.