Trinity students call for halt to Luas works during exams

TCD students living on campus are irate over the noise caused by the Luas works outside their apartments in Dublin city centre, particularly during the early hours of the morning. Video: Jack Power 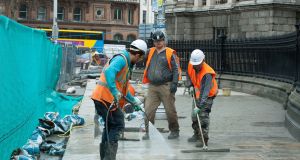 The pavement outside Trinity College in Dublin is in the process of being re-laid due to the Luas works. Photograph: Dave Meehan/The Irish Times

Late-night Luas construction works are disrupting Trinity College Dublin students study ahead of their final exams in May.

Students who live in campus accommodation by the front entrance of the college have said the Luas works noise is making it impossible to sleep, or study for their upcoming exams.

The head of the students union, Kieran McNulty, said they are moving students to guest rooms which the college have available or putting students up in nearby hostels to avoid the disruption. Mr McNulty said he has asked the contractor and the Luas management to stop their works for the weeks in May when Trinity students are sitting their summer exams.

Representatives from the college, the Luas, and the construction contractor had a meeting last Friday to discuss the issue. A spokeswoman for the Luas cross-city project said they are actively looking to try to accommodate students living on the city centre campus’ concerns. “The work has to be done. We are very cognisant, very aware of student’s concerns. We are trying to ensure we minimise the impacts of the works”.

The construction project has been under way for the past four years, and is scheduled to be completed this December. The heavy building works on the track are planned to be finished by June and the building contractor cannot consider stalling works for the month of May while students in Trinity have exams, she said. “The work has to be done – we are entering a critical part of the works. This has to be completed to allow the electrical work to start on the overhead wires and the track,” the spokeswoman said.

The noise of the late-night works is believed to affect around 100 students who live in the campus residences on Trinity’s front square, and in the Botany Bay apartments which border the D’Olier Street junction.

One student who lives in the Botany Bay rooms, Nora Fisher, said she has found the works “disruptive” since February. “Some nights it goes on past 3 am in the morning. There’s dust, noise, it’s very disruptive.”

Ms Fisher, originally from New York, is a final-year student studying drama and theatre. “A lot of people are incensed, I’d be more moderate. But with final exams coming up I don’t think it’s very considerate of students” she said.

Ciar McCormick is a final-year philosophy student whose bedroom faces directly out onto the D’Olier Street junction. He said at times the noise has been very bad at night. “It’s very important the Luas is finished. And living in the centre of the city I am very lucky, so some noise does come with that.” However, Mr McCormick said that some nights the heavy machinery used made it “impossible to sleep”.

Student union president Mr McNulty said the problem is that the works are going on through the night. “They’ve been working at nighttime right up until 6am in some cases. It’s a real difficult scenario. A lot of the students in these rooms are final-year students, with exams and dissertations, so we need to appreciate the amount of pressure they’re under.” Mr McNulty said he has asked that the Luas works stop for the period of Trinity’s summer exams, which run from May 2 until May 26.

The Provost of Trinity Patrick Prendergast moved from his house on the city centre campus due to the noise levels caused by the Luas works before Christmas. Prof Prendergast, head of the college, is believed to have moved to a nearby city centre apartment.

Trinity College is itself undertaking a large construction project on its campus to build 250 extra student accommodation beds on a site by Pearse Street. However, a spokeswoman for the university stated that this construction work is all conducted during daytime hours, and would not have the same adverse affect on campus residents as the Luas project.