Macron shows that talent beats other variables in politics 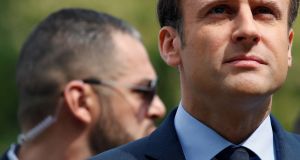 Emmanuel Macron standing with a bodyguard in Paris on Monday. He is the best-liked and least hated politician in France. Photograph: Christian Hartmann/Reuters

The British state noticed Emmanuel Macron before the voters of France did. Trained in the Cartesian style to be at equal ease with numbers and ideas, he wowed London as a negotiator in the attempted merger of EADS and BAE Systems five years ago. French technocrats trigger the one insecurity that British elites allow themselves – a mistrust of their own intellectual generalism as so much embroidery around a void of hard knowledge.

If Macron clinches the French presidency, detailed negotiations will resume – this time over the terms of Brexit. For the British right, therefore, he is someone to reckon with. For British liberals, he is someone to learn from: a living lesson in electoral politics.

Exactly what, then, is the lesson? It cannot be the importance of ideas. Macron stands for openness against closedness. But he is also as vague as that sentence. His commitment to reform France is implied by his youth and business past as much as by the particulars of a manifesto. The example cannot be organisational either. Even if Britain could sustain a new movement along the lines of En Marche!, it would have to contend with stronger established parties and the absence of a presidential shortcut to power.

No, the lesson is the man himself. The most important variable in politics – the ultimate determinant of electoral outcomes – is the individual quality of the candidate. We have lost ourselves in analysis of populism, globalism, elitism and the other abstract nouns of the day but, other than in the most extreme times, there is no ideological zeitgeist too strong for a good politician to buck.

Macron is another to prosper despite the times. A 39-year-old former banker of liberalish bent and haute-bourgeois provenance may govern a nation with a seniority bias, a suspicion of finance that verges on the superstitious and a deeper vein of populism than Britain. How? By being more plausible and attractive than others – the best-liked and least hated politician in France, in surveys that pit him against 24 other names.

None of this guarantees executive excellence. He could be a turkey of a president. But if winning is the question – for beleaguered liberals it is – then the moral of his story is that thought and even organisation are second to personal political talent.

The period between his birth in 1977 and the crash has entered the record as the Liberal Age. But it was also a sequence of contingent electoral contests: Ronald Reagan versus Walter Mondale for the US presidency, Margaret Thatcher versus Michael Foot for the UK premiership, Tony Blair against various Tories it is now a feat to recall. Voters were sick of postwar corporatism but – the thought experiment that makes the point – would they have elected Foot had he been the reforming Tory and Thatcher the leftist?

Again and again, events bring us back to this: the human factor, the centrality of the individual. Yet we have come to see the past few decades as a journey from liberalism to populism, as though electoral results are ordained by the superstructure of ideas and only a philistine would weigh the personal element. It is the politico’s curse (over-analysis) mixed with a deeper need in our species to see order in chaos.

For liberals, the implications are mixed. The way back to power need not involve decades of self-examination in harrowing Davos ante-room symposia with titles such as A New Synthesis of the Progressive Centre. It can happen in a flash with the arrival of a class act.

The bad news is that this arrival cannot be legislated. Forty years ago, a barrister decided that politics was more his thing. How much of the Liberal Age boiled down to decisions such as the young Blair’s? How much hinges on whether a charismatic entrepreneur somewhere quits to become an MP for the Labour party at its lowest ebb? More than we allow, I suspect. The only lesson of Macron is to find another like him.