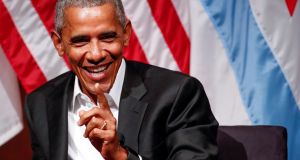 Former US president Barack Obama during a meeting with youth leaders at the Logan Center for the Arts at the University of Chicago on Monday. Photograph: Kamil Krzaczynski/Reuters

Barack Obama, making his first formal public appearance since leaving the White House, said on Monday that partisanship and special interests have poisoned the political process and hindered the search for solutions to the nation’s most pressing problems.

Speaking inside a University of Chicago auditorium to about 400 people, the former president said that the focus of his life outside of office will be the kind of work he did before entering politics, fostering leadership and grassroots engagement.

“The single most important thing I can do is to help in any way I can to prepare the next generation of leadership to take up the baton,” Mr Obama told the audience. While the nation confronts serious challenges including income inequality and inner city violence, he said they are all solvable.

The appearance in Mr Obama’s adopted hometown, at a university where he once taught constitutional law, took place as his successor, President Donald Trump, approaches the 100-day mark of his presidency on Saturday.

Mr Obama’s remarks will be closely watched for any hint of criticism of Mr Trump, even if heavily veiled. His decision to maintain a low political profile is playing out as Democrats, searching for a unifying message as well as a messenger to deliver it, face a power deficit in Washington and nationally following election losses for the White House, Congress and state houses.

Mr Trump has done plenty to provoke his predecessor, including accusing Mr Obama – without evidence – of wiretapping him at Trump Tower in New York during the campaign. In doing so the president called Mr Obama a “bad (or sick) guy,” and Mr Trump has repeatedly blamed the former Oval Office occupant for what he characterises as the “mess” he inherited at home and abroad.

The Chicago event is the first in a series of public appearances that Obama (55) will make in the coming months. On May 7th, he is scheduled to accept the Profile in Courage Award in Boston from the John F Kennedy Library Foundation.

Two days later, he will speak about food, climate change and agriculture at the Global Food Innovation summit in Milan, Italy. He’ll be joined by Sam Kass, a family friend who was his White House chef.

On May 25th, Mr Obama is set to appear at the Brandenburg Gate in Berlin with German chancellor Angela Merkel for a discussion about shaping democracy. The former president, who is writing a memoir that’s expected to earn him tens of millions of dollars, also will deliver paid speeches both in the US and while in Europe.

Mr Obama’s return to the public stage comes after a months-long, globe-trotting holiday tour that took him to California, the Virgin Islands and French Polynesia. The getaway included a cruise on a yacht owned by media mogul David Geffen with fellow passengers Bruce Springsteen, Tom Hanks and Oprah Winfrey.

While in Chicago, Mr Obama met privately on Sunday with a small group of young men to talk about gun and gang violence, his office said. The participants were part of a community outreach program created by Arne Duncan, his longtime friend and former education secretary.

Mr Obama hosted a Sunday evening dinner for his presidential library, the Chicago Sun-Times reported. The centre, to be built on the city’s South Side, is expected to cost $500 million (€460 million) or more to build and endow for the future.

The Obamas still own a home in Chicago, but it is unclear how much time they will spend in the city. They are renting a mansion in Washington until their second daughter completes high school in 2018.