Dublin's Poolbeg incinerator has taken its first deliveries today with the boilers set to start burning waste from this weekend. At full capacity, it will process 120 trucks of waste a day over a 14-hour period. Video: Bryan O'Brien 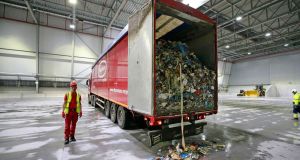 The Poolbeg incinerator took its first deliveries on Monday, with the boilers set to start burning waste from this weekend.

At 11.45am, a truck belonging to Thorntons Recycling – one of the incinerator’s largest clients – dumped the first load of waste on the plant’s 2,000 square metre mixing floor.

From there, the waste will be lifted by cranes and placed into chutes delivering it to a nearby furnace. The incinerator will not be fired up until next weekend at the earliest, as a base amount of about 2,000 tonnes is required for ignition.

Speaking during a ceremony to mark the opening of the plant, Covanta Energy Ireland managing director John Daly said it will handle about 1,800 tonnes of waste deposited by 120 trucks a day once full operating capacity has been reached.

Initial volumes are expected to reach about 20 per cent of potential capacity as the systems are gradually tested, and, of the facility’s two huge boilers, only one will be working, at less than 50 per cent capacity, at the start.

Developed as a public-private partnership between Covanta and the Dublin local authorities, the plant’s completion follows two decades of opposition from residents, city councillors and local TDs from all parties.

Some of the main objections have centred on environmental grounds, including concerns about the impact of fires or emissions levels on local communities and the protected biosphere of Dublin bay.

“In relation to fire, we have two high-powered cannons in there along with a sprinkler system, we have two large water tanks there each containing 1.1 million litres of water,” said Mr Daly, explaining the safety measures in place.

Last year Covanta had to close one of the two boilers at its newly-built Durham York incinerator near Toronto after emissions exceeded limits set by the Canadian ministry of environment for dioxins.

A Covanta plant in the US state of Virginia has been closed since February 2nd due to extensive fire damage. This follows a fire last December at another Covanta incinerator in Maryland which lasted several days.

Mr Daly pointed out that emissions levels from Covanta plants in the US have been in compliance in more than 99 per cent of all tests conducted, and that the Environmental Protection Agency will be contacted immediately if breaches of any nature occur.

The Poolbeg incinerator is set to be a feature of the Dublin skyline for the next 45 years at least, and Covanta says opposition to the development has become less ardent lately.

“The people who are commentating on the facility seem to have more of an understanding that it is a national piece of infrastructure, it’s absolutely needed. Dublin can’t continue to export its waste, it needs to deal with it itself,” said Mr Daly.

About 150,000 tonnes of unrecyclable municipal waste that will be burned at the facility will be provided by Thorntons, whose managing director Gary Brady praised the effect the new incinerator will have on Ireland’s waste disposal landscape.

“There have been issues with capacity in landfills last year so this new 600,000 tonne facility just takes that pressure off it. Over the last number of years there’s been up to 600,000 tonnes of waste exported so this will alleviate that problem,” he said.

2007: An Bórd Pleanála grants permission for a 600,000 tonne incinerator on Dublin’s Poolbeg peninsula despite the proposals attracting more than 2,500 objections, including from then Green Party minister for the environment John Gormley.

September 2014: US energy firm Covanta is given the go-ahead to construct the controversial incinerator by the managers of Dublin’s four local authorities despite attempts by councillors to block the plans.

October 2014: Work finally starts on Dublin’s new incinerator, which will be built at an estimated cost of €600 million.

April 2017: Following 32 months of work the Covanta facility officially begins processing waste, and is expected to be fully operational by September.

Call for the protection of midwifery-led maternity units 18:29
Brinks Cash Services to close three branches, with 160 jobs at risk 18:24
Penneys announces it will reopen Irish stores next week 18:09
Hundreds protest outside US embassy in Dublin over George Floyd death 17:59
Nine more deaths from Covid-19 recorded in Ireland along with 24 new cases 17:44