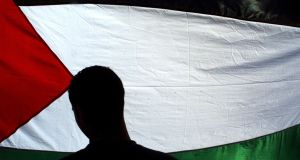 The letter points to the political and financial support which successive Irish governments have given the Palestinian people. Photograph: Yannis Behrakis/Reuters

Almost 90 leading artists, academics and former ambassadors have signed a letter to Taoiseach Enda Kenny urging the Government to formally recognise the state of Palestine.

The letter, whose 89 signatories include former US ambassador to Ireland Jean Kennedy Smith, former SDLP leader John Hume, actor Stephen Rea and musician Christy Moore, says the Government should move towards recognition “without delay”. Acting now would strengthen the case for a two-state solution and help to provide parity of status between Palestine and Israel, “which is essential for any lasting peace settlement,” the letter states.

The list of signatories includes trade unionists, writers, doctors and actors. Three retired diplomats who served as Ireland’s representative to the Palestinian Authority – Niall Holohan, Isolde Moylan and James Carroll – have put their name to the letter, which was delivered to Government Buildings on Monday by Prof John Kelly, former registrar and deputy president of UCD.

The letter points to the political and financial support which successive Irish governments have given the Palestinian people and notes “with pride” that Ireland was the first EU state to call for the creation of a Palestinian state.

“It is our belief that the principal international legal criteria for the recognition of a Palestinian state have already been met,” the letter states.”We hold that further official recognition of Palestine by EU member states will strengthen the case for acceptance of the two-state solution and will help in particular to provide parity of status between Palestine and Israel which is essential for any lasting peace settlement.”

The move comes amid gathering momentum in Ireland and elsewhere for wider recognition of a Palestinian state. Fianna Fáil has said it intends to bring a Dáil motion, which would be almost certain to pass, calling on the Government to proceed with recognition. The Dáil and Seanad adopted separate motions on the issue in 2014.

The programme for government says the minority administration will “honour our commitment to recognise the state of Palestine”, and Minister for Foreign Affairs Charlie Flanagan has said it is under “active consideration”. The official line is that the Government will act when it believes a move on recognition would help kick-start the Middle East peace process, and sources indicate a co-ordinated move among EU states would be the preferred approach.

In February, the Israeli newspaper Haaretz reported that Israel’s ambassador to Ireland, Zeev Boker, cabled a warning to the Israeli government that Dublin would soon recognise Palestine as a state. It reported that Mr Boker also proposed working to block the move by asking the US administration of president Donald Trump to put pressure on Ireland, as well as having Israeli prime minister Benjamin Netanyahu call Mr Kenny to discuss the issue.

The push towards formal recognition has gained more traction since the election of Mr Trump. The US president rattled Arab and European leaders in February by indicating he was open to a one-state solution, upending a position taken by successive administrations and the international community. In the letter to Mr Kenny, the signatories of the Irish letter refer to the Trump administration, saying it is “regrettable” that the two-state solution has been called into question. “It has become more important than ever therefore that Ireland should now join its name to the list of 137 countries that currently grant formal recognition to the state of Palestine,” they write.

Palestine has non-member observer status at the United Nations and its flag flies with those of member states at UN headquarters in New York. Sweden became the first EU member nation to recognise the Palestinian state in 2014 and has been followed by several others.

Palestinians seek a state in Gaza, the West Bank and East Jerusalem, parts of which have been occupied by Israel since the 1967 war.

Jean Kennedy Smith, former ambassador of the United States of America to Ireland