Trevor Noone sentenced to 13 years over Daniel McAnaspie killing 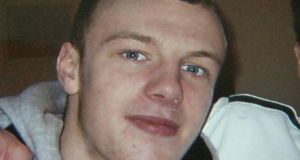 File image of Daniel McAnaspie. Trevor Noone has been sentenced to 13 years in prison today for his part in McAnaspie’s killing.

Trevor Noone was sentenced to 13 years in prison today for his part in the killing of teenager Daniel McAnaspie.

Noone (29), with an address in the Blanchardstown area of Dublin, pleaded guilty to manslaughter.

The 17-year-old’s body was found in a drainage ditch in Co Meath, almost three months after he was stabbed to death on February 26th, 2010, at Tolka Valley Park in Dublin 11.

Following the sentence on Monday, members of McAnaspie’s family clashed with Noone’s family and had to be separated by gardaí .

Passing sentence Justice Patrick McCarthy said the circumstances of McAnaspie’s death put Noone’s actions in the most serious category of assault to manslaughter cases. He said the events were of “quite a horrific nature” and that the victim did “nothing whatsoever” to deserve what happened to him.

The judge said McAnaspie did not have an easy life – he was an orphan at the time of his death and was in the care of the HSE. On the night he died his carers dropped him off in Finglas where he met some friends and then travelled to Blanchardstown where he met Trevor Noone and Richard Dekker.

Dekker was convicted of McAnaspie’s murder in a trial that ended in March. The evidence in the trial showed that in the early hours Noone and Dekker lured their victim to a secluded area in Tolka Valley Park on the pretence that they were going to fight some “lads from Corduff”.

Instead, McAnaspie was stabbed multiple times with a garden shears. The judge said simply mentioning the weapon shows how grave the offence was. He also noted that Noone told gardaí that he knew Dekker was carrying a garden shears and that he intended to give McAnaspie “a few digs”.

“That is why this must be at the top end of the range for offences of this nature,” he said. The judge said Noone had been unemployed all his life and has a modest sense of a moral compass.

Reading from a psychological report, he noted that Noone has a schizoid personality, cognitive difficulties and an emotional disconnection from the social world around him. Noting his history of offending, including firearms and drugs offences, he said Noone shows “scant respect for others in society”.

Given all of that, he said the appropriate sentence would be 18 to 20 years, but taking into account his guilty plea and signs of remorse, he reduced it to 13 years.

His sentence will be backdated for time already served. Dressed in a white Nike T-shirt, blue jeans and purple runners, Noone was led away to the sound of McAnaspie’s family applauding.

Outside there was a brief melee between the victim’s family and members of Noone’s family. As they emerged onto Parkgate Street, the victim’s sisters held a large poster in remembrance of their brother.

His sister Nikita said Daniel was a “lovely person” and described Noone and Dekker as “scumbags”.

Det Supt Colm Fox, who led the investigation, said: “While today’s events will not bring Daniel back, it brings some closure to the family knowing the perpetrators of this shocking act of violence have been dealt with by the courts.”