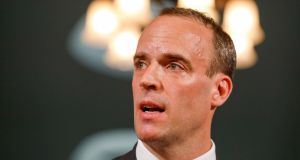 Checks on goods travelling from Britain to Northern Ireland would be carried out at British ports under fresh ideas to make the so-called backstop easier to agree.

The European Union’s chief Brexit negotiator Michel Barnier has said the EU and UK need to “de-dramatise” the backstop, which commits both to ensuring there is no hard Border even if Britain leaves the bloc without a deal.

The Irish Times understands that, under new ideas, customs and regulatory checks would be located in Britain rather than Northern Ireland.

Although scepticism still remains that such an approach could be acceptable to the UK, senior sources said agreement could be reached if there is “political will” in London.

“Can we find a way of operating the backstop that is less incendiary politically?” asked one. “You don’t want EU customs officers in Larne and Belfast. Could you do it somewhere else?”

It is also suggested that checks could be low-profile in nature and carried out by private contractors.

“You could find a way to do it where you don’t have people wearing EU uniforms.” Although committing to the principle of the backstop, the UK has rejected the EU’s interpretation of it.

British prime minister Theresa May and the DUP, on whose support she relies, say it would split Northern Ireland off from the rest of the UK.

The backstop is one of the main stumbling blocks to a withdrawal agreement being reached later this year. There is an acceptance in Dublin that the October deadline for the agreement will now be missed, with November seen as more realistic.

Efforts to make the backstop more palatable are currently being “tossed around”, but it is stressed that no specific proposals have been tabled in negotiations. The lack of alternatives coming from the UK has meant the EU is attempting to make its proposal more politically acceptable.

“The North could have the best of both worlds,” a senior Government source said. “It could have access to the EU and UK markets. On freedom of travel, that is already there. We are going to maintain the Common Travel Area.”

Checks would only be needed on goods travelling to Northern Ireland from the UK, and not the other way around, because of the prospect of them entering the EU single market through the Irish Republic.

On Thursday, the British government said it will seek to negotiate a special arrangement for North-South trade to ensure that the Border remains open even in the event of a no-deal Brexit. But trade between the Republic and the rest of the UK could be subject to the same bureaucratic arrangements facing other member states.

Brexit secretary Dominic Raab said the British government would maintain its commitment to keeping the Border open regardless of the outcome of Brexit negotiations, but he refused to rule out differentiated arrangements for Irish firms trading with the rest of the UK.

“We’re saying very loud and clear that we will not allow anything to disrupt the terms of the Belfast agreement and that we wouldn’t return to any form of hard border,” he said. “I’m not quite sure what it would look like so I’m not going to hypothetically rule it in or out.”

Mr Raab was speaking after the publication of 25 technical notices outlining the impact of a no-deal Brexit on different sectors and economic activities.

A number of the notices, including those on trade, tariffs and the cross-border movement of medicines, medical devices, blood and human organs, suggest that special arrangements may be required for Northern Ireland.