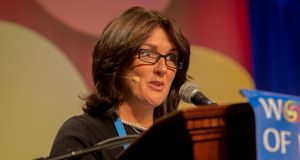 Olive Foley, widow of rugby coach Anthony Foley told the World Meeting of Families her husband ‘would be very proud and very happy’ that all those he ‘soldiered with’ were joined together ‘as one great family’. Photograph: Collins

Olive Foley, widow of Munster rugby coach Anthony Foley, delivered an emotional tribute to the “family of sport” that supported her and her family after her husband’s death almost two years ago.

Speaking at the World Meeting of Families’ pastoral congress at the RDS in Dublin, Ms Foley talked about the importance of her family, her family of friends and “family of church” after her husband’s sudden death from a heart attack in a Paris hotel in October 2016 during an overseas trip with Munster.

“But I also have a family of sport,” she told several hundred Catholics attending the congress during a panel discussion entitled “Celebrating Family and Sport”.

Joined on the panel by her husband’s former Munster and Ireland team-mate, Ronan O’Gara, Ms Foley said that in the wake of her husband’s death any celebration seemed impossible “but in hindsight what went on around me in the middle of that horrendous grief was a celebration”.

Breaking down with emotion as she spoke, she talked about the support of her family within sport in the days after his death.

Her husband gave “so much to sport”, she said, but that “sport has really given back”.

“They say that you reap what you sow. He would be very proud and very happy today that all those that he soldiered with, those he coached and those he played with and played against were joined together as one great family and to help us his family in a blanket of support,” she said.

That family, she said, included Mr O’Gara, who become visibly upset as she spoke, wiping tears away.

Ms Foley recalled her two sons being included in the Munster team huddle before their game at Thomond Park in Limerick on the day he was buried, describing it as a symbol of the “family of sport”.

“We have very little in life if we don’t have family and family is worth celebrating.”

Ms Foley received a lengthy standing ovation after her speech.

In his brief address, Mr O’Gara told the audience that he accepted the invitation to speak to support Ms Foley, to admire what she was doing and to reflect on what she had to say.

“It is a cliché but that family that ‘Axel’ led was incredibly tight. It was a special dressingroom and a dressingroom becomes a family,” he said.

“I think it most definitely has enriched our lives, and it also helped us to deal with real issues. It helps us to share thoughts or worries, how we deal with illness, create values and respect, caring for each other. For me that’s what today is all about.”

Philip Mulryne, the former Manchester United player who become a Dominican priest after his footballing career, spoke about his disillusionment with the material life outside football during his time playing and how he left his faith behind at home in Northern Ireland after he moved to Manchester.

He recalled Manchester United manager Alex Ferguson ringing his mother to reassure her that he was doing well when he was a youth player and the Scot encouraging all the players to get married early to settle down as “family would keep you grounded”.

He also had other chores as a youth player.

“I had to clean Roy Keane’s boots – and they had to be clean, I can tell you,” he said, to laughs. “You had to earn the respect of the changing room.”