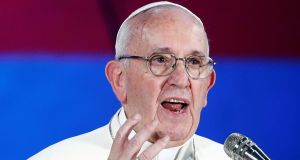 The Survivors of Child Abuse group called on Pope Francis to “repatriate all assets” of abusive religious orders to the State. Photograph: Max Rossi/Reuters

The Survivors of Child Abuse (Soca) group has called on Pope Francis to “repatriate all assets” of abusive religious orders in the Republic to the State.

In advance of the papal visit on Saturday, the group said it had requested a meeting with the pope but was unsuccessful.

They would have told him, they say, the title “World Meeting of Families” was a “grotesque misnomer” as it was “principally the families of the poor that were targeted as a cash-crop by his church which grew fat and bloated on the proceeds. . . the ransacking of children’s lives for pecuniary gain has been a constant feature of Roman Catholic operations in Ireland since the mid-19th century”.

“We would have asked the pope to utterly repudiate the unjust Irish State-church indemnity agreement of June 2002 which unfairly capped the liability of 18 religious orders at a mere €128 million leaving the taxpayer to shoulder the €1.5 billion cost of redress, and to order them into honest dialogues with the Government with a view to refunding the Irish taxpayer.”