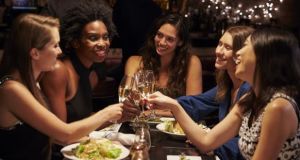 For women, the highest numbers were found in Ukraine (4.2), and Andorra, Luxembourg and Belarus (all at 3.4). Photograph: Getty Images

The “myth of the drunk Irish man” is probably inaccurate, according to the author of a major international study on alcohol consumption which finds Irish men’s habits comparable to other Europeans.

However, it also found that Irish women were found to consume the seventh highest level of “average daily drinks” at 3.1, although this is the only area of alcohol use in which Ireland had a top 10 ranking.

The research, published in the Lancet today, also finds there is no safe level of alcohol intake and the healthiest approach is to drink as little as possible, if anything at all.

The study said that over a single year, one alcoholic drink a day increases the risk of developing one of 23 related health problems by 0.5 per cent. This rose to 7 per cent for those who had two drinks a day. One drink is defined as being 10g of alcohol.

The Global Burden of Disease Study looks at alcohol use and its health affects in 195 countries between 1990 and 2016 and found drinking to be related to 2.8 million deaths each year.

“The long-standing myth of the drunk Irish man is likely incorrect,” the study’s lead author Dr Max Griswold, of the Institute for Health Metrics and Evaluation at the University of Washington, told The Irish Times.

“The average person in Ireland drinks very comparably to [elsewhere in] Europe. It’s still quite high but so is all of Europe.”

The highest average amounts of daily drinks for men were in Romania (8.2 units), Portugal and Luxembourg (each at 7.2), and Lithuania and Ukraine (both at 7).

For women, the highest numbers were found in Ukraine (4.2), and Andorra, Luxembourg and Belarus (all at 3.4). Irish women were in seventh position.

It concluded that no level of alcohol is safe as any benefits are offset by negative health implications, particularly the risk of cancers.

Alcohol is associated with nearly one in 10 deaths in people aged 15-49, it said.

The kinds of negative health impacts the research considers include organ and tissue damage, injuries and poisoning from intoxication, self-harm and violence.

The study, which was funded by the Bill & Melinda Gates Foundation, used data from 694 studies to estimate how common drinking alcohol is worldwide and 592 studies on associated health risks.

“Although the health risks associated with alcohol starts off being small with one drink a day, they then rise rapidly as people drink more,” said Dr Griswold.

In global terms, one in three people (or about 2.4 billion people) drink alcohol, including 25 per cent of women and 39 per cent of men. On average, women consumed 0.73 alcoholic drinks per day and men 1.7.

For those aged 50 and older, cancer constituted 27.1 per cent of alcohol-related deaths in women and 18.9 per cent in men.