Britain is showing contempt to North over Brexit, O’Neill warns 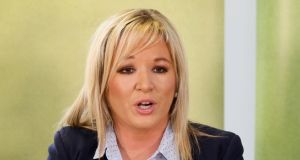 The British government was treating Northern Ireland with contempt in relation to its guidance on the possibility of a no-deal Brexit, Sinn Féin’s Northern leader Michelle O’Neill asserted on Thursday.

Ms O’Neill was dismissive of the no-deal scenarios outlined by the British Brexit secretary Dominic Raab and called for a special London-Brussels meeting to solely deal with the concerns of Northern Ireland.

“The guidance published today confirms the absolute contempt and blatant disregard the Tories have for the people of the North,” said the Sinn Féin leader. “It confirms the disastrous consequences of Brexit, including more bureaucracy and more expense for businesses.”

Ms O’Neill said the guidance demonstrated the “utter lack of preparation for the no-deal scenario they are hurtling towards”.

And she added, “There is an onus on the Taoiseach and the Tánaiste to stand up for the rights of Irish citizens and in the national interest on Brexit and there needs to be an urgent special meeting in September between Britain and the EU to deal exclusively with the arrangements for the North.”

Ms O’Neill said she raised her concerns when she spoke to Northern Secretary Karen Bradley on Thursday.

She said from that phone conversation it was “abundantly clear that her government’s plan is to do nothing to help restore the political institutions in the North”.

“The Tory government has no regard for the people of the North and the price of its toxic pact with the DUP is no Assembly and no Executive,” added Ms O’Neill.

The Ulster Unionist Party leader Robin Swann, who also spoke to Ms Bradley about Brexit on Thursday, raised his concern about a section of the guidance which advised that Northern businesses engaged in cross-Border trading should seek advice from the Irish Government in the absence of a Brexit deal.

“As unionists we have always been acutely aware of the economic importance of access to the UK’s internal market, but we also recognise and welcome the extent of cross-Border trade with the Republic of Ireland,” he said.

“As we approach the endgame in terms of Brexit negotiations, it is essential that as much clarity and certainty as possible are reached with regard to trade between Northern Ireland and the Republic,” he added.

Alliance Brexit spokesman Stephen Farry said it was “farcical” for the British government to suggest cross-Border businesses should contact Dublin for advice in the event of a no-deal Brexit.

He added: “So far these ‘technical notices’ are exercises in hope and wishful thinking rather than facing up to reality. The UK cannot unilaterally withdraw from a complex set of relationships built up over many decades without major consequences.”

The SDLP Brexit spokeswoman Claire Hanna said the “lack of a technical paper on no-deal preparations for Northern Ireland is due to the fact that the government know that committing such a ludicrous plan to writing will expose the damage it would inflict”.

“The SDLP have consistently challenged the UK government in their abysmal approach to exiting the EU and reluctance to take steps that will cause the least damage possible,” she said.

“From the outset, the SDLP have been clear that a ‘no-deal’ Brexit will be catastrophic for the people of this island. The only way to ensure our way of life is untouched is to remain within the single market and customs union,” added Ms Hanna.

UUP MEP Jim Nicholson said that while the possibility of no deal “may be dominating the headlines, there is still time for a fair and balanced agreement to be reached between the United Kingdom and the European Union”.

Ann McGregor, chief executive of the Northern Ireland Chamber of Commerce and Industry said the guidance delivered “two key outcomes for Northern Ireland businesses – it confuses them more and increases their costs”.

“This, in tandem with the lack of key infrastructure decisions that can be made here, amplifies the need for an Executive to return to represent Northern Ireland at this critical time,” she said.