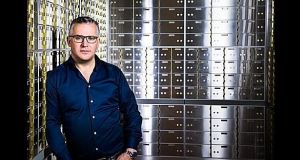 Merrion Vaults founder Séamus Fahy: “They are saying that they worried about sterling’s weakness.” Photograph: The Irish Times

Fears over sterling’s weakness and Brexit have prompted increasing numbers of people in Northern Ireland to buy gold and store it south of the Border, says one safety deposit specialist.

Séamus Fahy, founder of Merrion Vaults, says the UK’s EU exit – set to happen in March 2019 – is being felt across his business. The firm runs safe-deposit box centres in Dublin and several British cities,

Over the last nine months, Merrion Vaults has experienced a 200 per cent increase in new clients from Northern Ireland who are buying gold and opting to store it in the company’s Dublin facility.

“They are saying that they worried about sterling’s weakness. Significantly, a lot of them have interests abroad and their big fear is a plunge in sterling,” he says. “Gold gives them a good hedge against that.”

The British currency endured one of its worst runs against the euro and dollar last week on warnings that the UK looks increasingly likely to crash out of the EU without a deal. Such a hard Brexit would leave relationships with its biggest trading partners in chaos.

Fahy says Merrion Vaults’ expanding client base in the North recognises that the pound’s decline would damage their spending power in other jurisdictions. Consequently, they are seeking ways to ringfence their position against this possibility.

The company is considering opening in Belfast on the back of the interest shown and is looking for suitable premises, says the Merrrion Vaults co-founder.

Along with providing specialised storage for valuables, the company also sells gold bullion to clients.Its business in Britain is also expanding, partly due to concerns about Brexit’s impact. Last year Merrion Vaults opened in Liverpool’s historic Royal Liver Building and it also has premises in Glasgow and Newcastle.

“We are seeing clients in Liverpool, Newcastle and Glasgow Vaults opting to buy and store gold,” says Fahy.

Merrion Vaults was established in 2014 as the first independent safe deposit-box service in the Republic.

1 Aer Lingus confirms job cuts due to ‘decimation in demand’
2 Major credit union plans to limit savings accounts to €40,000
3 Passengers face queuing in car parks at Dublin Airport
4 Why is Germany suddenly embracing its inner Keynesian?
5 Avoca wins battle with Monkstown locals over cafe operation
6 Ikea among major retailers to reopen next week
7 Revenue tells court it was entitled to raise €1.64bn tax assessment against Perrigo
8 Penneys will not reopen on Monday despite expected changes to lockdown rules
9 Student accommodation sector set for harsh Covid-19 lesson
10 In six months we will be in the grip of a 1980s-style recession
Real news has value SUBSCRIBE
Save money on international transfers