The Irish Times view on the Brexit papers: the no-deal nightmare

Like the UK, Ireland needs to get ready for the possibility of a no-deal Brexit 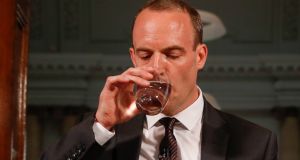 Dominic Raab, the British secretary of state for exiting the European Union, speaking on Brexit in London on Wednesday. Photograph: EPA

The publication by the British government of papers on a “no deal” Brexit scenario only serve to underline how damaging such an outcome would be. The UK is far from prepared – and such is the chaos that would ensue that huge economic damage would be inevitable. The papers do start to set out the first principles of what a no-deal scenario would look like and how the UK would hope to respond. To be clear, this would be if the UK and EU do not reach a withdrawal agreement and the UK leaves next March without a deal.

The papers start to provide guidance to business on what measures it should take to prepare – some of which may well apply at some stage even if there is a deal. The notices suggest that special arrangements may be required for Northern Ireland on trade, tariffs and the cross-border movement of medicines, medical devices, blood and human organs.

Any kind of Brexit will be costly but a no-deal outcome would cause huge uncertainty and economic cost. Trade in and out of the UK would, the papers make clear, be subject to the rules set down by the World Trade Organisation, meaning customs checks and tariffs. There would be huge disruption in trade between the UK and EU as these new arrangements are put in place.

The EU is the UK’s biggest market and, contrary to statements yesterday by Brexit secretary Dominic Raab, no new deals elsewhere will compensate for Brexit disruption. Meanwhile, questions over rules and regulations in areas as diverse as drugs, food safety and air travel will raise a host of new issues. The UK’s presumption that the EU will agree to continue as now in many of these areas – even if the UK wants to – may not accord with the reality of a no-deal Brexit.

The documents repeat London’s intention to avoid a hard border on the island of Ireland and said it would “engage constructively” to avoid this in the event of a no-deal. But this brings us no further in seeing how this could happen. Businesses in the North are understandably annoyed at the suggestion they might need to talk to Dublin to see what new arrangements might apply after a no-deal Brexit. Agreeing a backstop arrangement on the Border – how to avoid the need for visible checks no matter what the outcome of trade talks – remains a key challenge.

The Government here will hope that it is sorted, as it would help clear the way towards signing a withdrawal agreement.

This would remove the threat of the UK crashing out next March and would also raise hopes of a favourable long-term trade deal. Such a deal would be in the interest of both sides, but can still not be guaranteed.

Like the UK, Ireland needs to be ready for a no-deal Brexit.

1 Coronavirus: Further two deaths in Republic as expert warns against ‘rush’ to ease restrictions
2 Normal People Class of 2020: The nine college friends in the series
3 We need to pay very close attention to what is happening in Britain now
4 Changes to Covid-19 payments to be considered next week, Minister says
5 Connell losing touch with club championship is real tragedy of Normal People
Real news has value SUBSCRIBE