Next government could bring in work-from-home tax incentives – Taoiseach

Government formation talks likely to continue until end of next week 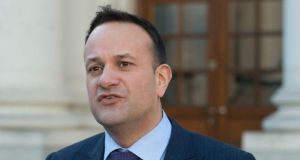 Taoiseach Leo Varadkar suggested the next government could encourage people to work from home by offering them income tax incentives. Photograph: Dave Meehan

Taoiseach Leo Varadkar has suggested that the next government could encourage people to work from home in the long term by offering them income tax incentives.

Government formation talks are continuing, with negotiators from Fianna Fáil, Fine Gael and the Green Party expected to hold a session on the economy on Tuesday.

Tánaiste Simon Coveney last night told a Fine Gael reference group that the party will ensure the next government is prudent in its economic approach.

Mr Coveney and Fianna Fáil leader Micheál Martin have also been in contact with some Independent TDs in recent days and the Regional Independent Group is due to meet Mr Martin, Mr Varadkar and Green leader Eamon Ryan later this week.

All sides are now downplaying earlier expectations that a deal will be finalised by the end of this week, with the end of next week now seen as a more realistic timeframe by which a draft programme for government can be agreed.

All three parties have suggested that encouraging people to work from home should be pursued after the coronavirus crisis has passed, and Mr Varadkar has said that consideration should be given to income tax incentives.

The suggestion was made to the Taoiseach and Fine Gael leader in a letter from Dermot O’Leary, the general secretary of the National Bus and Rail Union, who also sent a similar letter to Mr Martin.

Mr Varadkar said in his reply that Mr O’Leary’s “suggestions on staggering primary school, secondary school and college start times has merit and requires further consideration as do income tax incentives to encourage more people to work from home”.

A Government spokesman added: “Current Government policy is to encourage firms to allow more home-working and also more flexible working. It could therefore make sense for the next government to look at ways of encouraging more home-working in the long run. And the proposal for tax incentives, suggested by the NBRU, is certainly worth considering.”

Mr Martin also told Mr O’Leary that all options must be considered in helping public transport deal with the effects of the virus, such as “staggering starting times for schools, third-level institutions and workplaces as well as supporting those who wish to work from home”.

Fianna Fáil did not provide further clarity on what kind of support Mr Martin envisaged for working from home. The joint framework document already agreed between Fianna Fáil and Fine Gael said the public sector would be mandated to “move to 20 per cent home and remote working in 2021” and that “incentives” would be provided for “private sector employers to do likewise”.

Green sources said they are likely to push in the government talks for a new public transport strategy implemented in Dublin as a result of the virus to be replicated in other cities such as Limerick, Cork, Galway and Waterford.

Large-scale bus diversions, restrictions on cars and a widespread reallocation of road space to pedestrians and cyclists are planned. While they are temporary, Green sources said they provide a template for permanent change in cities.

Green Party leader Eamon Ryan raised introducing similar plans in other cities in the Dáil last week and a well-placed source said the party will also push for such a move in government formation talks, as well as accelerating BusConnects plans in a number of cities.

“Let’s do BusConnects for other cities,” the source said, adding that big changes can be made in cities relatively rapidly.

Mr Ryan last week told the Dáil: “Our bus network capacity will be significantly restricted if we are still applying the social distancing measures. This gives us an opportunity or necessity in providing other safe modes for people to get into work and the obvious way for a lot of people is to walk or cycle.”