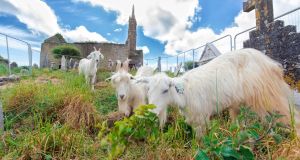 The goats get down to business in St Matthew’s graveyard, Templebreedy Church cemetery, Crosshaven, in a bid to keep growth under control. Photograph: Michael MacSweeney/Provision

An old Cork graveyard is getting a makeover thanks to four goats who have been hired for the summer to eat overgrowth around headstones and boulders, rather than using strimmers and mowers.

The idea for so-called “goatscaping” at St Matthew’s graveyard at Templebreedy Church cemetery in Crosshaven came to Fianna Fáil Cllr Audrey Buckley during a visit to Wales last year.

There, goats and sheep are used to keep churchyards trimmed, and walking paths clear for tourists, courtesy of their healthy appetites for ample local vegetation.

The goats have attracted considerable attention since they first arrived at St Matthew’s last week, with local children turning up with their parents to catch a glimpse of the animals.

However, they took a while to settle in. “We only had two at the start. Harris and Oscar were just chilling out and not doing much because everyone was bringing apples to them,” said Ms Buckley.

The goats came from Norah de Bara from Castletownbere, who added to the pair with a couple of wild goats from Hungry Hill that “took her nearly a week to catch”.

“We will have them until September-October because it is rutting season and they will have to go back to their lassies down in Castletownbere then ,” she said.

For now, the goats are “on trial” to the volunteers involved in the Templebreedy “Save Our Steeple” campaign, who have been leading conservation works at the 1788 church.

Cork County Council has donated temporary fencing to keep the goats inside the graveyard. The fencing will be moved weekly as the four progress with their work over the summer.

However, they will need to make a return trip next spring. “There is no way the graveyard will be done by September because it’s a couple of acres,” said Ms Buckley.

The back of the cemetery, where the Hayes family of Crosshaven House are buried, is “full of brambles”, she said. “We would like to get a vision of what is there underneath.”

Local children are being encouraged to come equipped with gloves and secateurs to cut brambles and ivy for the goats, rather than bringing them apples for treats.

Local farmer Dave Walsh regularly checks on the goats, as do others. “This is a real community story. It wouldn’t work unless it was a community event. The community are watching them. This type of work is all very common in the states. The goats and sheep do a better job environmentally. It’s a no-brainer really,” he said.