New blood and urine test ‘can detect autism in children’ 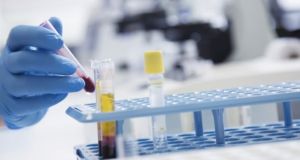 Scientists in Britain say they have developed a blood and urine test which can detect autism in children.

Researchers at the University of Warwick in England said their research has found a link between so-called autism spectrum disorders (ASD) and damage found in proteins in blood plasma.

A study in Ireland carried out by Dublin City University, funded by the Irish Autism Society, found that the current rate of autism in Ireland is 1 in 100.

ASDs mainly affect a person’s social interaction and communication, with symptoms that can include speech disturbances, repetitive and/or compulsive behaviour, hyperactivity, anxiety, and difficulty adapting to new environments.

As there is a wide range of ASD symptoms, diagnosis can be difficult and uncertain, particularly at the early stages of development.

The newly-developed test is the first of its type in the world and one that offers hope that children affected can get treatment earlier in their lives, the researchers say.

They found the most reliable of the tests they developed was examining protein in blood plasma, which found children with ASD had higher levels of the oxidation marker dityrosine (DT) and certain sugar-modified compounds called advanced glycation end products (AGEs).

Genetic causes are thought to be responsible for around a third of cases of ASD, while the rest are believed to be caused by a combination of environmental factors, mutations, and rare genetic variants.

But researchers believe their new tests could reveal yet to be identified causes of ASD.

They also confirmed the previously held belief that mutations of amino acid transporters are a genetic variant associated with ASD.

The Warwick team worked with collaborators at the University of Bologna in Italy, who recruited 38 children who were diagnosed with ASD along with a control group of 31 other children between the ages of five and 12. Blood and urine samples were taken from the children for analysis.

The Warwick team discovered there were chemical differences between the two groups. Working with a further collaborator at the University of Birmingham, the changes in multiple compounds were combined together using artificial intelligence algorithm techniques to develop a mathematical equation to distinguish between ASD and healthy controls. The outcome was a diagnostic test better than any method currently available.

They said the next steps are to repeat the study with further groups of children to confirm the good diagnostic performance and to assess if the test can identify ASD at very early stages, indicate how the ASD is likely to develop further to more severe disease and assess if treatments are working.

The research was led by Dr Naila Rabbani, reader of experimental systems biology at the University of Warwick, who said: “Our discovery could lead to earlier diagnosis and intervention.

“We hope the tests will also reveal new causative factors.

“With further testing we may reveal specific plasma and urinary profiles or ‘fingerprints’ of compounds with damaging modifications. This may help us improve the diagnosis of ASD and point the way to new causes of ASD.”

Genetic causes have been found in 30-35 per cent of cases of ASD and the remaining 65-70 per cent of cases are thought to be caused by a combination of environmental factors, multiple mutations, and rare genetic variants. However the research team also believe that the new tests could reveal yet to be identified causes of ASD.

However, Dr James Cusack, Director of Science, Autistica, expressed cautioned about the report’s finding, saying: “There have been several attempts at developing biomarkers for autism, none of which have been particularly successful.”

He said: “This attempt is weakened by a small sample size, possible overfitting of data and a lack of comparison groups. This study does not tell us how effectively this measure can differentiate between autism and other neurodevelopmental or mental health conditions such as ADHD and anxiety.

“The design of the study itself is sufficiently robust as an exploratory experimental study, but the results cannot be used to propose a potential new diagnostic measure at this stage.”

Dr Max Davie, spokesperson for Royal College of Paediatrics and Child Health (RCPCH), was equally cautious: “This is a promising area however this is a very long way indeed from a ‘test for autism’.In order to add to existing diagnostic practice, a test would have to either predict later Autism Spectrum Disorders (ASD) at an early age, or improve upon existing clinical methods of assessment.

“In terms of early identification. The analysis was derived from children whose ages averaged 7-8, so there is no data to indicate that very young children will have the same metabolic pattern and that the results found would be reproducible in infants.

“In terms of supplementing and supplanting clinical assessment, it is not clear what this will add, given that the specificity and sensitivity are less than perfect- if a child clinically does not look autistic, then this test will not persuade anyone that they are, as things currently stand.”

“While we applaud the arrival of this interesting area of research, it is important that it is not adopted with too much enthusiasm- if applied to a large population is will produce large numbers of ‘false positives’, causing huge worry and potential harm to children and families.” –Agencies

1 Donald Trump is in trouble, and that could spell very bad news
2 House parties are being held ‘with abandon’, Holohan warns
3 Tyrone midwife on the cover of Vogue magazine
4 Trump under fire from US military after troops threat
5 O’Doherty and Waters ordered to pay legal costs of case against State over Covid-19 laws
Real news has value SUBSCRIBE