New ship expected to be 50m in length, and will replace the 31m ‘Celtic Voyager’ 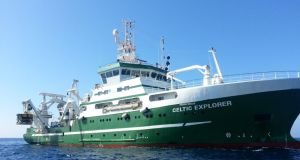 The new vessel will be a sister ship to the State’s largest research ship, the 65m Celtic Explorer (pictured), which cost €23 million when it was sanctioned in 2000

The Government has earmarked the purchase of a new marine research vessel for the State in the National Development Plan.

No specific costing has been given in the plan for the ship, but the new vessel is expected to be 50m in length and would replace the 31m Celtic Voyager, which has been at sea for more than 20 years.

The new vessel will be a sister ship to the State’s largest research ship, the 65m Celtic Explorer, which cost €23 million when it was sanctioned by former minister for the marine Frank Fahey in 2000 and commissioned in April, 2003.

Marine Institute chief executive Dr Peter Heffernan welcomed the Government’s commitment, and confirmed work was at an “advanced stage” towards formal sanction for the capital project.

“The Marine Institute is delighted with the news that the replacement for the Celtic Voyager is included in the National Development Plan,” he said. The institute hopes to move to tendering for a detailed design later this year, he said.

Analysis conducted by the institute estimated €3.1 million in annual income could be generated by building a replacement for the Celtic Voyager. The current two vessels have 38 crew and 21 shore-based staff, with technical and operational support outsourced since 2006.

The vessel will be based in Galway and will be used by the Marine Institute, the Geological Survey of Ireland (GSI), many other State agencies and universities. It will also be available for charter work with European research institutions.

The Marine Institute also owned Holland I, a remotely operated vehicle which was used in the extensive search for the Rescue 116 winch crew, Paul Ormsby and Ciarán Smith, off the north Mayo coast last year.

Search and rescue divers affiliated to the Irish Underwater Council also participated in the searches off Blacksod, and Blackrock island, but the two men still remain missing.

A report for the Irish Underwater Council, the umbrella body for club divers, records some 200 trained search and recovery divers were involved in 35 call outs last year, responding to the Irish Coast Guard, Gardaí and families, and there were 12 recoveries.

The council’s national search and recovery officer John Joe Rowland says the number of call outs from the Irish Coast Guard has increased since a service level agreement was signed with the State body. All trained divers give their time freely, and divers from across the State participated in the Blacksod search.

The divers will gather at a national search and recovery meeting during the Dive Ireland symposium in Limerick on March 3rd and 4th. Winners of the council’s underwater photograph contest will also be announced as part of a programme that includes presentations on Ireland’s deep Atlantic, cave diving and diving on the Lusitania off the Cork coast.