The well known Waltons music shop in Dublin city centre is to shut its doors amid soaring rental prices but the Waltons New School of Music upstairs in the building will continue. Video: Bryan O'Brien 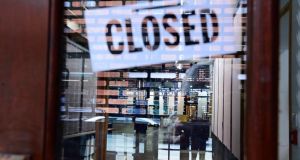 “It was derelict. There was the Bewley’s cafe which was half closed, our shop and a few little local businesses,” said Niall Walton, managing director of the Irish music store. “Now it’s nearly an extension of Temple Bar. ”

A quarter of a century later, the Walton family is waving goodbye to its store in Dublin’s city centre. Waltons announced last month that it is relocating permanently to its recently-opened music store in Blanchardstown.

The Waltons New School of Music, which operates above the South Great George’s Street premises, will continue to offer music lessons but the shop itself, which gained international fame following its appearance in the Oscar-winning 2007 film Once, is closing its doors.

With city-centre rental prices continuing to soar, many small and family-run businesses have ceased trading. In 2013, another central Dublin music shop, Opus II, closed its doors after more than a century of trading in various locations. In Cork, the Liam Ruiséal bookshop on Oliver Plunkett Street is to close after more than 100 years in business.

“We’re a marginal business, we’re not clothes or electronics, so we only sell to about 10 per cent of the population,” said Walton. “The internet is also taking away a lot of business from the music industry. People will buy anything online, so the turnover goes down in general because of online shopping; and on top of that the rents go up.

“We had two branches but the cost of doing business in the city centre was too high. There had to be some redundancies but these are people we’ve worked with for many years, they understand what the problems are.”

He said the decision to move the business out of the city centre was “heartbreaking” after nearly a century in the city.

In 1922, Martin Walton, Niall’s grandfather, opened the music shop on North Great Frederick Street. An accomplished violinist and Feis Ceoil winner, Martin Walton took part in the Easter Rising when he was a teenager, was arrested during the War of Independence and was imprisoned in Ballykinlar internment camp in Co Down.

After fighting in the Civil War, he opened a music shop and established the Dublin College of Music. The original store closed a few years ago when Waltons opened in Blanchardstown. They also previously had a store in Dún Laoghaire.

In 2007, the George’s Street shop appeared in the movie Once when Glen Hansard and Markéta Irglová perform the Oscar-winning song Falling Slowly.

“We must have had thousands of people coming in to photograph the piano they played on. In the stage productions they’d mention Waltons and the Oscars ceremony recreated the interior of the shop for their performance. It was very good publicity but ultimately it wasn’t enough,” Niall Walton says.

During these challenging times, Walton often reflects on his grandfather’s amusement when he mentioned the business was struggling during the 1970s.

“I was 19 and said business was pretty tough. He said: ‘Tough? You couldn’t spell it.’ He reminded me that when he opened in 1922 O’Connell Street was in ruins after the war. Then there was the Wall Street Crash, De Valera’s economic war on England and in 1938 Hitler came along. Then it was six years of survival during the war, another 10-15 years for the world to recover, a few easy years in the 1960s and then the oil crisis in the 1970s.

“Things go up and things go down. We complain but we don’t have a clue what tough means.”