Independent TD Michael Fitzmaurice and Green Party leader Eamon Ryan discuss the needs of rural Ireland versus Dublin as the National Plan 2040 is released by the government. Video: Enda O'Dowd 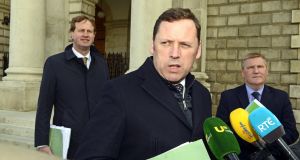 Sinn Féin is to seek independent legal advice on whether the Government’s National Planning Framework (NPF) needs to be voted on in the Oireachtas.

The strategy aims to manage an anticipated population growth of one million people over the next 20 years, and was launched on Friday in Sligo with an accompanying 10-year infrastructural plan.

However, Opposition parties have raised questions over the legal basis for the implementation of the framework.

Sinn Féin TD Eoin Ó Broin said the Taoiseach and Minister for Housing Eoghan Murphy had sought to mislead the Dáil on the matter. He said an independent legal opinion was required and confirmed he would be asking the Oireachtas committee on housing to seek such advice.

The Government has insisted the framework will automatically be placed on a statutory footing when the Planning and the Development Bill, which is in the Seanad, is signed into law. A spokesman for Mr Murphy said legislation allows for the plan to be reviewed after each census and also “places it on a statutory footing”.

Fianna Fáil’s housing spokesman Barry Cowen said the Government was seeking to undermine legitimate questions being posed by members of the Opposition about the framework.

He said linking the framework to the National Development Plan, which provides funding for capital projects, was an attempt to conflate the two issues.

Mr Cowen said TDs questioning the legal basis for the planning framework were being portrayed by Government Ministers as challenging development in the State.

“The opposite is the case,” he added. “Fianna Fáil is going to scrutinise the document over the coming days and assess where there are flaws.

“It is disingenuous and absolutely wrong to say politicians who question whether this has the legal footing it requires are trying to block the development of capital project.”

Among the measures contained in the NPF are the designation of Sligo as a regional centre for the northwest with Athlone fulfilling the same role for the midlands.

Examples of areas that could benefit from this fund, the plan says, include Cork Docklands, Limerick regeneration projects, the Waterford quays and Galway city centre regeneration.

A €1 billion culture fund will drive investment in institutions such as the National Museum, the National Library and the Crawford Art Gallery in Cork.

Meanwhile, it is understood Fianna Fáil is to begin a regional tour of the country next week as it develops a housing policy ahead of the next election.