Councillor says Noel Grealish, who claimed ‘spongers’ would be moved to town, has ‘no regrets’ 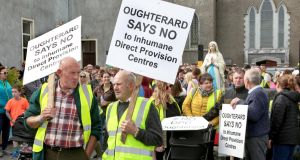 People gather for a silent protest march at Oughterard, Co Galway on Saturday in response to plans for the placing of a direct provision in a disused hotel in the town. Photograph: Joe O’Shaughnessy.

A silent protest has been held in Oughterard, Co Galway in response to the potential development of a direct provision centre for asylum seekers at a disused hotel in the town.

Local TD Noel Grealish has come in for criticism for telling a public meeting on the matter earlier this week that the type of people to be accommodated in the centre would be “economic migrants from Africa” whom he described as “spongers”.

“I can guarantee you it is not the persecuted Christians and Syrians that are coming here. It is the economic refugees that is coming in from Africa that are trying to get across the Mediterranean and ended up in Europe and ended in up Ireland and ended up in Oughterard,” he said.

He received a round of applause after concluding his speech and claiming the creation of a direct provision centre in the town would “destroy the fabric of Oughterard”.

There have been calls for the Independent Galway West TD, who has not spoken further in public on the issue since, to clarify his comments and apologise.

However, local councillor Tom Welby on Saturday said Mr Grealish had “nothing to apologise for”.

He said he had spoken to Mr Grealish and that he appeared to be “Ok” about the backlash over his comments and has “no regrets.”

“I fully support Deputy Grealish and I feel he has nothing to apologise for,” Cllr Welby told The Irish Times, adding that others in the community were also supportive of the TD.

Saturday’s protest saw the crowd of some 1,500 people march silently from the town’s Catholic Church to the Connemara Gateway Hotel, where the start of extensive refurbishment works a few weeks ago raised local concerns about it being coverted into a direct provision centre.

The march was organised by local people to send a message to the Department of Justice that they do not want such a centre in their town on the basis that the community already lacks infrastructure.

Rory Clancy, one of the organisers, said he was happy with the dignified way in which the participants carried themselves.

Many of the participants wore yellow vests but Mr Clancy said the protest had not been infiltrated by any “right wing group”.

“This is all local people here today. We organised it and we walked it. It’s great to see that the town has a heart,” Mr Clancy added.

Marian Earls, another organiser of the event, reminded those marching that it was a silent protest and that there would be no speeches outside the former hotel. She also asked people to be orderly and for those who felt they could not remain silent, to walk away from the march.

Participants were asked to sign a petition calling for a stop to any plan to accommodate asylum seekers in the Connemara Gateway.

One man described the march as “very respectful”.

“There was no chanting or bad behaviour. It was just local people sending a message to the Government that we don’t want this inhumane centre in our town,” he said.

Rev Anthony Previte, a retired former Archdeacon of Tuam, now living in Oughterard, took part in the march but did not want to speak to media.

He has previously spoken against the direct provision system, describing what is happening in Ireland as “a tragic situation. . .a dreadful problem.”

He spoke at Wednesday’s public meeting where he called on the Government to do something to stop “the despots who are causing this misery sending those people over here”.