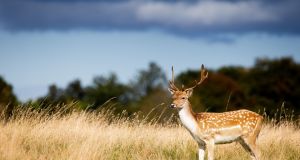 A deer pictured at the Phoenix Park this week. Photograph: Tom Honan

Nature, biodiversity and the contributions they made to human existence are in trouble, President Michael D Higgins has said.

Speaking at the opening of the inaugural Phoenix Park Biodiversity Festival and Honey Show in Dublin, Mr Higgins said the number of plants, insects, mammals and birds being threatened or endangered is growing year on year, and that the land, ocean, atmosphere and biosphere were being altered “at an unparalleled rate.”

The scientific evidence for the loss of nature and biodiversity was “unequivocal that the primary causes are human driven,” said the president, referring to a UN report published earlier this year that showed biodiversity is being lost “at a rate unprecedented in human history”.

Mr Higgins implored people to make their own individual efforts to tackle the loss of biodiversity.

“As with climate change, the situation is urgent, but solutions are possible and each of us must do our part to reverse these deeply worrying trends that threaten humans’ future survival on the planet,” he said.

He urged people to take “simple actions” such as “mowing your garden less often, retaining soft landscaping over hard paved surfaces and letting the odd flowering weed spring up in your garden here and there can be hugely beneficial to pollinators”.

“I encourage you to try what you can. Every measure has the potential to influence change and protect our environment and biodiversity and even assist in climate migration,” he said.

The president said the Irish National Biodiversity Data Centre, which collects data on biodiversity, has shown rates of decline in the butterfly and bumblebee populations that “must be of concern to us”.

Opening the fifth annual Honey Show at the park, the president said that the “most important managed species of pollinator” was the honeybee and he was pleased in the recent surge in the number of people taking up “the craft of beekeeping”.

He described the participation of about 50,000 farmers in a State-run green, low carbon, environmental programme as “hugely influential on the farming landscape because it prioritises actions which target the preservation of priority habitats and species”.

He praised the Office of Public Works for its management of the Phoenix Park, describing the festival as a “celebration of the rich and natural biodiversity, right here in our capital city, is a great example of what we can do in an urban setting.”

“Biodiversity decline and loss of habitats does not happen in isolation: other societal and economic issues are also relevant,” he said, in prepared remarks.