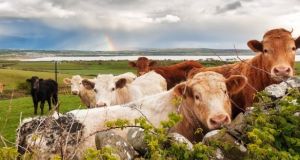 Members of the public have been urged to report incidents of water pollution, fish kills or illegal fishing. File photograph: iStock

Farmers have been urged to be vigilant to the pollution risks posed to rivers from slurry discharges following the conviction yesterday of a large dairy farmer for polluting a river near his farm in East Cork.

Sean Long, Director of the South Westerdan River Basin District at Inland Fisheries Ireland said that livestock manure and other organic fertilisers, effluents and soiled waters have the potential to cause devastating effects on fisheries.

“Good farmyard management and using preventative measures helps stop accidental discharges of polluting substances and protects the local environment which will have a significant and lasting positive impact on valuable wild fish populations and general wellbeing in an area,” he said.

“I urge the farming community to remain vigilant to the risk of pollution from yards and slurry tanks,” said Mr Long, adding that members of the general public can contact Inland Fisheries Ireland confidentially to report any incidents of water pollution.

Mr Long was speaking after East Cork farmer, Brian Duncan was fined €8,000 by Judge Patricia Harney at Midleton District Court on foot of prosecution brought by Inland Fisheries Ireland over a slurry spillage into the Douglas River at Garryduff, Dungourney in April 2018.

Judge Harney was told that an initial discharge of slurry from Duncan’s farmyard was followed by further reoccurrences, resulting in a number of court adjournments and hearings to allow completion of court directed remedial works.

A witness for Inland Fisheries Ireland told the court that the Douglas river, a tributary of the Owenacurra river which flows through Midleton, had been severely polluted by the slurry discharges which had rendered the riverine habitat inaccessible to spawning trout and salmon.

Evidence was also given that Duncan, who runs a large farm with a dairy herd in excess of 1,000 at his holding in Dungourney, had invested significantly in remedial work to improve his yard facilities since the initial incident in April 2018.

Judge Harney convicted Duncan under Section 171 (1) of the Fisheries Consolidation Act 1959 and Section 3 (1) of The Local Government Water Pollution Act 1977, awarding full costs and expenses of €8,139 to Inland Fisheries Ireland.

Commenting afterwards, Mr Long said that anyone who wished to report incidents of water pollution, fish kills or illegal fishing could contact Inland Fisheries Ireland in confidence on 1890 34 74 24 or 1890 FISH 24.