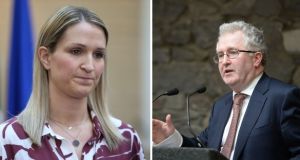 It appears Minister for Justice Helen McEntee circulated only one name for the Supreme Court post – Séamus Woulfe.

Minister for Justice Helen McEntee will face Dáil questions on Thursday over the appointment of Supreme Court justice Séamus Woulfe following the Government’s decision to back down in its efforts to resist Opposition attempts to force the Minister into a full Dáil statement on the issue.

It has been a long path, beset by political turf wars and parliamentary intrigue. So how did we get here?

What exactly has happened?

The Government on Wednesday yielded to the statements and a formal question-and-answer session after two weeks of opposition pressure calling for Ms McEntee to deal with the process of the appointment when three sitting judges had also expressed an interest in the position. Government Chief Whip Jack Chambers said two hours had been allocated for the debate with five minutes of questions from each opposition group and party.

How is this different to what had been promised?

The Minister had offered to address the matter in her ordinary oral parliamentary questions. This approach was rejected by the Opposition who said it was insufficient and limiting. Some parties would have been unable to ask questions, as well as questions being grouped and submitted to the Minister beforehand.

Why did the Government resist this?

A statement and a Dáil question-and-answer session are a fairly standard reaction to a political controversy – indeed, Coalition Ministers have undergone this several times already since June, rarely emerging with more than a scratch.

So what will she be asked?

The Opposition is likely to home in on several issues. First, they will look to establish precisely who knew what, and when, about Woulfe’s appointment. The usual practice is that the names of those interested in a judicial appointment are circulated among senior Government figures in advance of a name going to cabinet, but on this occasion, it appears McEntee circulated only one name – Woulfe. It later emerged that three judges had expressed interest in the role. The Government’s position is, effectively, that McEntee satisfied her obligations to colleagues by contacting them with one name beforehand.

The Opposition may seek to broaden the debate as to whether names of interested parties were circulated in the course of other judicial appointments the Government has made; McEntee has said that sometimes she did so, but not on other occasions.

Green Party leader Eamon Ryan has said he was not told of such interest on other occasions. The Opposition may seek to make political hay from such apparent contradictions and further their argument that there was political horse-trading around the post of Attorney General, something the Government has denied.

The Government has noted the fact that Woulfe’s application was supported by an endorsement from the Judicial Advisory Appointment Body and that his application considered by McEntee alongside all the other names that had expressed an interest, before she reached her decision.

What forced matters to a head?

Steps taken by two Oireachtas committees seem to have increased pressure on the Government. First, the Opposition withdrew from the Dáil business committee, the body which sets the agenda for the house. While this committee ultimately has little power and the Government could continue using its majority to ignore Opposition demands for Ms McEntee to appear, this was a dramatic step. It indicated that the Opposition were not going to drop the matter and would seek to frustrate the business of the house to get what they want.

While in some ways the Opposition has little power, the Government does rely on it for the functioning of parliament. It was clear they were willing to make life very awkward, visibly so, and pursue their goal through sheer bloody-mindedness.

Moreover, the justice committee took the unusual step of clarifying that Ms McEntee had not been subjected to a full question-and-answer session when she appeared last week, as the Government had claimed. Ms McEntee answered one question at the committee, but no further questions were asked.

The committee is chaired by a Fianna Fáil TD James Lawless. And this came after interventions last week from Jim O’Callaghan TD and Senator Lisa Chambers, both of whom suggested a full statement and Q&A would be appropriate.

Part of the Opposition’s strategy was to keep the issue on the agenda, make life difficult for the Government and try and force cracks in the Coalition’s unity. It appears they were making progress on this front, so it has been decided Ms McEntee should meet them head on.

And how did we get here again?

The Oireachtas Golf Society dinner, of course. Woulfe’s attendance was the subject of a review by former chief justice Susan Denham, who found he should not resign. But a transcript of his interview with Denham sparked further controversy, culminating in Chief Justice Frank Clarke expressing the personal view he should step down. This sparked a political crisis which led the Government to consider impeachment, bringing the associated political pressure and focus on the appointment process, culminating in today’s decision.