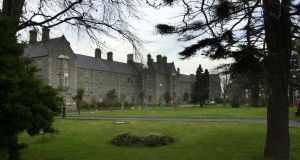 Psychiatric nurses are to demand that all money realised from the sale of valuable lands and buildings at the existing Central Mental Hospital in Dundrum in south Dublin be re-invested by the Government in mental health services.

The Psychiatric Nurses Association (PNA) said that despite record levels of funding for the health service this year, the share of the overall budget allocated for mental health has decreased.

The union, which holds its annual conference on Thursday, said up to 200 additional nurses will be required to be taken on to facilitate the opening of the new National Forensic Mental Health Services in Portrane, in north Dublin next year.

It said given the additional staffing requirements, it was envisaged that the new facility - which will replace the existing Central Mental Hospital in Dundrum - will be brought into use on a phased basis.

PNA general secretary Peter Hughes said his union will be will be “ insisting that all proceeds from the sale of the very valuable land in Dundrum is protected and ringfenced for investment in the wider mental health services”.

Mr Hughes said the fall in the share of the overall budget allocated to mental health was “outrageous”.

He said it “clearly highlights the lack of understanding of our politicians of the inadequacy of our current services or the extent of the growing demands for mental health services at every level.”

“It is incomprehensible and a retrograde step especially when it comes just four months after the launch of the latest ten-year Government strategy ‘Sharing the Vision’.

Mr Hughes said the new National Forensic Mental Health Services in Portrane which was scheduled to be completed and handed over to the HSE next month,was by far the largest capital development of mental health services in the State.

“The new service will comprise of a 170-bed campus which is over 70 beds more than the current service in Dundrum. Incorporated within is a 120-bed forensic hospital, 10- bed CAMHS (child and adolescent) unit, 10- bed mental health intellectual disability unit and a 30-bed intensive care rehabilitation unit.

“Considering it will take an extra 200 nurses to staff the campus it is envisaged that the service will open on a phased basis. It is expected that the 120-bed forensic hospital will open towards the end of March/April 2021.”

“However, it is essential that the whole service is opened and fully staffed within a specific timeframe as the specialised child and adolescent mental health, mental health intellectual disability unit and the intensive care rehabilitation units are non-existent throughout the country at present.”

Separately talks between the Government and trade unions on a new public service agreement are expected to deal with proposals for reform and modernisation on Thursday. It is understood the Government is keen to retain work practice flexibilities which were introduced during the Covid-19 emergency.

Number receiving Covid-19 treatment in hospital falls by over 100