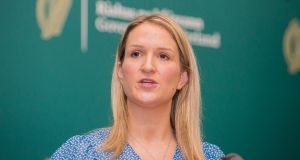 Minister for Justice Helen McEntee bows to pressure and will take Opposition questions in the Dáil. Photograph: Gareth Chaney/ Collins

The Minister for Justice Helen McEntee will finally face questions in the Dáil on Thursday after the Government caved in on Wednesday to Opposition demands that she submit herself to detailed questioning by Opposition TDs.

At first McEntee and her colleagues maintained she couldn’t take questions because of the separation of powers and the danger of prejudicing any impeachment proceedings. Then, last week, she offered to bring forward her normal ministerial oral questions – a controlled and limited procedure which would have constrained the Opposition’s opportunity to pursue her on questions and maximised her ability to run down the clock. On Wednesday, in the face of co-ordinated and escalated action from the Opposition, the Taoiseach finally announced in the Dáil that McEntee would bow to pressure and take questions in the usual manner for a Minister under fire. The details were hammered out at a business committee meeting on Wednesday night.

There are several questions that the Opposition is likely to put to McEntee. When did she learn of the plan to appoint Séamus Woulfe to the Supreme Court? Leo Varadkar indicated to Taoiseach Micheál Martin and the Green Party leader Eamon Ryan before the Government was formed – once they had decided not to reappoint Woulfe as attorney general – that there was a vacancy on the Supreme Court and that Woulfe had been recommended as suitable by the Judicial Appointments Advisory Board. So the Woulfe appointment was on the cards as soon as the new Government was formed. Was McEntee told this by Varadkar when he was telling her about her new job? If not then, when?

When did McEntee learn that other judges were interested in the job? The names of the judges were in a file in the Department of Justice, we are told. But did McEntee know that Woulfe was already in the frame when she opened that file? Given the appointment of Woulfe was on the cards at this stage, could she have given due consideration to the candidacy of the other judges?

McEntee is a skilled politician and mastered her European affairs brief quickly. But she had little experience of the law and the judiciary. Did she take any advice or discuss the relative merits of the candidates with anyone? With the Tánaiste? With the new Attorney General? With the former minister, Charlie Flanagan? Did she speak to Woulfe himself at any stage?

And what of other judicial appointments since then? Has she followed the same process? Have candidates been discussed with anyone, or is she making all the decisions by herself? Another Supreme Court vacancy is due to be filled soon. How does she propose to fill that?

McEntee is a rising star in Fine Gael, close to Varadkar and promoted by him to be minister for Europe, one of the highest profile junior posts. When the coalition was formed in June, she became Minister for Justice, surprising many who expected her to be brought into Cabinet but not into the high-profile, high-pressure Department of Justice, where the role is normally filled by a more experienced politician.

Sooner or later, a landmine goes off in the Department of Justice – that’s the reason why it’s usually an experienced pair of hands that is given the role. The landmine having duly exploded, McEntee now finds herself at the centre of the crisis, the most serious of her career.