€10.3bn strategy to be re-examined to take account of potential long-term Covid impacts 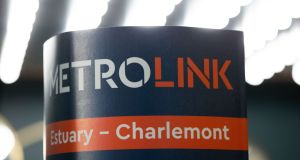 Transport plans covering the entire Dublin region for the next 20 years are to be reviewed to take into account new Government policies and the potential long-term impacts of Covid-19.

The €10.3 billion Greater Dublin Area Transport Strategy published by the National Transport Authority (NTA) in 2016 included the development of Luas lines to Bray, Finglas, Lucan and the Poolbeg peninsula, as well as the Metro North line from the city centre to Dublin Airport and Swords, and the Metro South from the city to Sandyford.

The NTA will on Thursday begin a review of the strategy to assess the progress made on these major infrastructural projects and will establish the priority projects up to 2042.

The review will reflect updated national policies on sustainability in climate action plans and legislation, as well as the 10-year National Development Plan published in 2018, the National Planning Framework and the Regional Spatial and Economic Strategy finalised earlier this year.

It is understood the review will also take into account the potential impacts of the pandemic, beyond the short-term. It is expected to take a year to complete, and so is unlikely to involve a reconsideration of the immediate plans for the metro, an application for which is expected to be submitted to An Bord Pleanála next April.

The Metro South project was last year shelved with the NTA announcing that the renamed Metrolink line would terminate at Charlemont at the Grand Canal near Ranelagh where it meets the Luas Green line.

However, the NTA at the time said it would tunnel past the Charlemont stop to allow the conversion of the Luas to metro “to occur at an appropriate point in the future” but the upgrade would not be required “for some time, perhaps 20 years or so”.

It is likely these long-term plans for a southside element of the Metro will be a major focus of the review. Minister for Transport Eamon Ryan is on record as favouring re-routing the southside line to Rathfarnham. Writing in The Irish Times last year, prior to the general election and his appointment as Minister, the Green Party leader said the NTA needed to “switch tracks” and extend the metro to the southwest, with stations in Rathmines, Terenure and Rathfarnham.

It is understood that a potential metro line to University College Dublin will also be considered as part of the review.

The mothballed Dart underground plan could also make a reappearance as part of the process. In 2010 Irish Rail applied to An Bord Pleanála for a railway order for the €4.5 billion project to link Heuston station to the Dart line, with underground stations at Spencer Dock, Pearse Station, St Stephen’s Green, Christ Church and Heuston,

In November 2011 the project was shelved by the Fine Gael-Labour government. The following month the board granted the railway order.

The NTA will also publish an “issues paper”, asking the public to provide their views and objectives as part of a preliminary consultation process. A second consultation process will take place around the middle of next year following the development of draft strategy proposals.