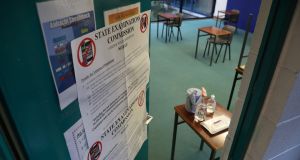 Minister for Education Norma Foley said it was her firm intention’ for the conventional Leaving Cert exams to be held in 2021. Photograph: Nick Bradshaw

Secondary students are feeling “unrelenting pressure” as a result of constant testing from teachers who say the results may determine their Leaving Cert grades if exams are cancelled next year.

The Irish Second-Level Students’ Union will tell the Oireachtas education committee on Thursday that many exam-year classes are sitting monthly or weekly exams.

In a submission, union president Reuban Murray said these tests had taken on “a whole new level of pressure and stress” for students on the basis that it may influence their final grades.

“This is putting unnecessary and unsustainable amounts of anxiety on students. If we do not remedy this it will result in widespread burnout across our schools,” he said.

The Covid-19 pandemic resulted in the 2020 Leaving Cert summer exams being replaced with a system of calculated grades, which used teachers’ estimates based on students’ coursework and test results.

Mr Murray says “over-assessment” is now taking place because education authorities have not enough clarity on the status of the 2021 State exams.

“There have been no concrete contingency plans communicated to schools,” he said. “Simple questions remain unanswered, such as: ‘What will happen if a school has an outbreak during the exams?’ We need to clearly communicate the contingency plans to schools as soon as we can and lift this fog of guesswork, assumptions and uncertainties.”

Minister for Education Norma Foley said on Wednesday that it was her “firm intention” for the conventional Leaving Cert exams to be held in 2021, with the appropriate public health and contingency measures in place.

However, she has not ruled out the use of calculated grades in the event that exams are not permitted to go ahead.

Mr Murray said schools and students were underprepared to make a transition to online learning if there were to be further school closures.

“This is not just an issue that affects us in the event of national school closures, because every week students are instructed to self-isolate for 14 days,” he said. “We need a proper strategy now.

“At the moment students have been reporting inconsistent levels of support when self-isolating. This ranges from students being cut off with no support to schools who make the effort and go the extra mile. We need to ensure everyone who is isolating to protect their peers does not fall behind and that they still receive an education.”

He says a national online learning strategy is needed to effectively equip our schools to support all students.

Separately, a new study indicates that the gap in reading achievement between students in disadvantaged schools and others has narrowed.

The research is based on findings from the OECD’s Pisa study – an international study of educational achievement among 15-year-olds – and compares the achievements of students in disadvantaged (Deis) and other schools in 2018.

It found that 22 per cent of students in Deis schools have low reading scores, compared with 9 per cent in non-Deis schools.

Students with low reading scores are more likely to have inadequate reading skills for future study and work.

Dr Lorraine Gilleece, one of the report’s authors, said the improvement in the average reading achievement of students in Deis schools was welcome.

“While there has been little change since 2012, these earlier achievement gains have been sustained,” she said. “This is consistent with trends in non-Deis schools over the same period where we have seen stable achievement patterns since 2012.”