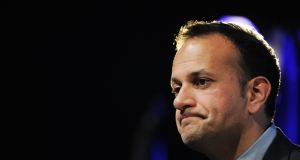 Leo Varadkar: “We must ensure that the Brexit talks are handled in a smooth and coherent manner”. Photograph: EPA

He said the outcome of the Westminster poll on Thursday represented an opportunity for Ireland.

“The results of the UK election indicate to me that there is no strong mandate to proceed with a hard Brexit, which represents an opportunity for Ireland,” he said.

Mr Varadkar said the Irish Government was ready to participate in negotiations on Brexit and to help restore power-sharing in Northern Ireland.

“We must ensure that the Brexit talks are handled in a smooth and coherent manner to secure the best possible outcome for Ireland, for Europe and the UK,” he said.

Reacting to the result of the British general election, Mr Flanagan said the first job of the new UK government would be to clarify the British position on the exit from the European Union.

The outcome of the election highlighted the golden rule of politics, which was “never take people for granted”.

Speaking on RTÉ’s Today with Sean O’Rourke show, Mr Flanagan said he was pleased that all the Northern Ireland parties had indicated their interest in seeing devolved government established.

“Everyone agrees that a devolved government is needed,” he said.

Mr Flanagan added that he was looking forward to being in Northern Ireland next week.

“It’s far too early to start predicting the actual outcome of negotiations (re Brexit). That uncertainty means it is going to be a difficult few weeks. It is vital that negotiations begin as soon as possible,” he said.

He added that comments today by DUP leader Arlene Foster and Gerry Adams were encouraging in relation to Brexit.

Talks about forming a Northern Ireland executive should see common ground on Brexit, he added.

Mr Flanagan said that the Irish Government is prepared to sit down and negotiate.

When asked if he thought he would still be Minister for Foreign Affairs next week, he said: “I do bring a measure of experience to the job.”

The new government will struggle to argue for a hard Brexit, he told Newstalk Breakfast.

“They will not have the capacity to get it through parliament. Whatever is ultimately agreed must be able to pass that test.

“What that means in some respects is that we are looking at a very incoherent situation emerging, where you may not have a singular coherent voice within the Conservative party on how to proceed in relation to Brexit.”

He said British prime minister Theresa May must now consider her position as leader.

“I think cool heads are required, and common sense must prevail.”

Fine Gael MEP Brian Hayes said the task of successfully concluding the upcoming Brexit negotiations has now been made much more difficult.

Theresa May’s position and that of her negotiating team in Brussels would make it more difficult to conclude a good outcome for the EU and Ireland within the existing timeline.

He said that if Sinn Féin was concerned about the impact of Brexit on Ireland – North and South, it should abandon its policy of abstention and take its seats in the House of Commons.