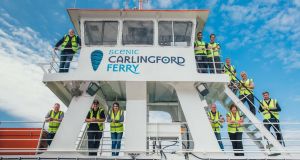 Scenic Carlingford Ferry, a new cross-Border 44-car ferry service linking the Mournes and Cooley mountain regions, is making its first sailing this summer and will run all year round.

The future of the tourism industry in Carlingford and the Cooley peninsula is under threat from Brexit according to a Co Down man operating a cross-Border passenger ferry.

Brendan O’Neill (59) operates the small Seascapes passenger ferry between his home town of Warrenpoint in Co Down and Omeath in Co Louth.

His family has run the business there over the last century.

Locals, cyclists, day trippers, and “hen parties but not stags” – because they are too rowdy – plus other tourists use the ferry seven days per week from May until September.

“I am the third generation of my family doing the ferry,” he said.

“My father did it and my grandfather. My grandfather used to be a pilot on the lough but of course he is deceased now.

“We had three or four boats at one time but there is only one boat now. I keep it going just as a traditional thing but I wouldn’t be doing if it didn’t pay.”

Mr O’Neill says he has serious concerns about the possible implications of the UK leaving the EU and what Brexit means for the business in the Border area.

“It all depends if it is a hard Brexit or a soft Brexit,” he said.

“I am old enough to remember the old custom stations that used to operate in Co Louth and Co Down so that was always a bit of a handful, passengers getting on and off were searched.

“Brexit will not kick in for maybe two years but it is definitely on my radar.I think it would have negative impact on tourism on the whole Carlingford Lough, Cooley peninsula area.”

Mr O’Neill has concerns about the future of the business he operates at the top of the lough.

Bottom of the lough

Meanwhile, at the bottom of the lough a new cross-Border 44-car ferry service, called Scenic Carlingford Ferry, linking the Mournes and Cooley mountain regions is making its first sailing this summer and will run all year round, with summer operating hours of 7am to 9.30pm.

Fraser Ferries Group managing director Paul O’Sullivan explains €10 million has been spent by three private families from Clare and Limerick, with ferry industry experience, and the project has been welcomed by Tourism Ireland and Tourism Northern Ireland.

The investors are confident the 15-20 minute service between Greencastle, Co Down, and Greenore, Co Louth, will be a huge success, create jobs and have knock-on effects for the wider economy. “The Carlingford ferry on is going to be transformational,” he said.

“It has captured the imagination of the region, it has been talked about for 15 years.”

Mr O’Sullivan says the business will not being changing its plans because of Brexit and that this may end up offering up opportunities as well as some threats.

“If Brexit and a hard Border does arrive we would form the view that potentially people would prefer to queue at a ferry terminal where they can relax and go through the Border checks in comfort rather than being curtailed on a motorway.

He added: “The threat of Brexit curtailing movement, that would potentially have an impact on our projections and our business plans.”