‘I witnessed the sacrifices people made to get to polling stations’ 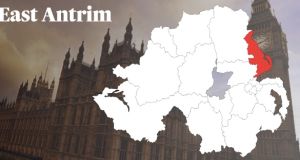 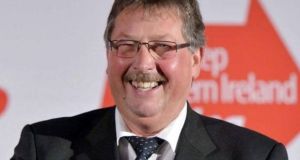 DUP’s Sammy Wilson was elected to Westminster, with a comfortable 21,873 votes.

Other candidates looking to secure the seat included Mark Logan of the Conservative Party, who secured 963 votes.

Mr Wilson, who was widely tipped to be re-elected, beamed as he took to the podium to address his family and supporters who had gathered to congratulate him. He said he had found this election a “humbling experience”.

“I want to thank the thousands of people who came out across East Antrim to vote in the rain and who voted not just for me but for the Democratic Unionist Party.

Mr Wilson’s comment was met by a large cheer from the crown still at the Valley Leisure complex who had stayed to see the result of the night.

“I am pleased that Unionism in this election has found its voice. We had a very simple message as we went around the doors and that was despite the propaganda we had from Sinn Féin, there is a Unionist majority in Northern Ireland.

“I know that not all of them vote for my party, but still there are those people who value the link between Northern Ireland and the rest of the United Kingdom. We give voice to their views today and will continue to do so.”

Mr Wilson said he hoped that in the coming months the “Pro Union Voice” would be heard more clearly in Westminster under his new role.