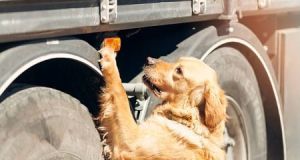 A sniffer dog checks a heavy goods vehicle. Chairman of Monaghan County Council PJ O’Hanlon has said: “If we go back to the hard border situation there is absolutely no doubt that this will be the problem - the racketeers and the criminals that lived and flourished on the Border. That is the last thing that we want to see.” File photograph: iStockPhoto

Criminals will ensure cross-Border smuggling will return if a hard border is put in place after Brexit, the Seanad has heard.

Chairman of Monaghan County Council PJ O’Hanlon was responding to a question from Fine Gael Senator Michelle Mulherin at the committee on the withdrawal of the United Kingdom from the European Union.

“If we go back to the hard border situation there is absolutely no doubt that this will be the problem - the racketeers and the criminals that lived and flourished on the Border. That is the last thing that we want to see,” he said.

“Will that smuggling take off again? Definitely, no doubt about it. Once there’s a hard border, be assured that business and that practice will be back because unfortunately there are people that are interested in making money.”

Mr O’Hanlon, who was joined by other local authority representatives from the Republic and Northern Ireland, said a lot of hard work had gone into “stamping this practice out” in recent years and no-one wanted to see it return.

“If it happens again, where will that money end up? Who will that go to?”

He said communities living near the Border had been through a lot over the years. “I think we deserve a break. We need help and we’re down here today asking for your help.”

Meanwhile, the committee heard the loss of European Union Peace and Interreg funding in the aftermath of Brexit would be “unthinkable” for counties along the Border corridor.

Interreg funding comes from the the European Regional Development Fund to stimulate co-operation between regions in the EU.

“It is still not easy. Without the Interreg programme, without the Peace programme, it is unthinkable how we could maintain interest in that very important work,” Ms Martin said.

She said the programmes must continue, and the border corridor needed “political will” from Dublin, London, Stormont and Brussels.

“We believe that it is important that the needs of the people of the Border region continue to be reflected at the highest levels in Government.”

Mr McCann said many small businesses, “the backbone of the border corridor”, had already closed, most notably in the mushroom industry,

“Irrespective of what part of the 500km Border you live on, the out-workings of Brexit will be keenly felt.”