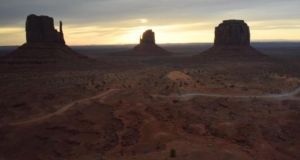 Monument Valley is home to the Navajo Nation, who have been badly affected by coronavirus. Photograph: Eric Baradat/AFP

Few places in the world have been as devastated by coronavirus as the Navajo Nation which spans part of Arizona, Utah and New Mexico in the southwestern United States.

Just 175,000 people live in an area the size of the Republic of Ireland. The nation has been hit by two waves of the virus, the second and latest even more severe than the first.

Currently, numbers are increasing by 150 a day and the nation is back in a complete lockdown for the next three weeks.

Poor infrastructure and high levels of deprivation and chronic illness have made the nation particularly susceptible to the disease.

When the Navajo appealed for help in March as the virus first threatened, that appeal was noted in Ireland. Irish people recalled the support of another native American people, the Choctaw Indians, during the Great Famine 175 years ago.

The money to the Navajo gofundme appeal started to come in from Ireland and it keeps coming. A cursory glance reveals names including Amy Heffernan, Breige McGinn, Eamon Gallagher, Alan Slattery, Brian McCarthy, Seamus Traynor and Dermot Sweeney who have donated in the last 48 hours alone. U2 drummer Larry Mullen has also donated $100,000 (€84,000) to the fund.

To date “at least” $3 million (€2.5 million) has come directly from Irish people living in Ireland, according to the Navajo Nation attorney-general Doreen McPaul.

“It is quite overwhelming at a human level. It is the good in all of the bad that is going on,” she said.

Along with the online donations, people have sent money in envelopes while apologising for not being able to get to a bank, she said.

In addition, the Irish Cultural Center in Phoenix and the McClelland Irish Library next door volunteered to act as a drop-off hub for supplies. So many people donated food, cleaning materials and clothes in May that the National Guard in Arizona was called on to drive two huge articulated trucks the 4½-hour journey to the Navajo reservation.

“The Irish people and the Navajo people have a shared history of oppression. What Ireland has done with the Navajo nation is something that I am really proud about,” said Ms McPaul whose father is a dual citizen of Ireland and the United States. She is part-Navajo and part-Irish.

“It makes me incredibly proud of these cultures that are coming together in a time of great need. The Irish response has been truly phenomenal, really incredible.”

Ms McPaul, whose ancestry is from Armagh and Laois, said the impact of the virus has touched every Navajo family, including her own. She has lost an uncle to the virus recently.

“We have very hard, tragic stories where multi-generations of a single family have been lost. Great-grandparents, grandparents and grandkids were all wiped out.”

Ms McPaul said the Navajo Nation opted for fundraising when it was unable to access funds from the Trump administration. She said native peoples in the US are waiting for the federal government to release $600 million (€506 million) to fight the pandemic.

The Navajo people in Arizona took their revenge on President Donald Trump by handing the critical state and its 11 electoral college votes to president-elect Joe Biden.

Navajo Nation president Jonathan Nez told The Irish Times that a record number of citizens had cast their ballots.

“Overwhelming they decided on the Biden-Harris ticket because of the outreach we did for everyone that wanted to vote. Navajo people were tired of being ignored by the administration and wanted no more of this devisiveness. People cast their vote for change and healing.”

Mr Nez is the co-chair of the Arizona Democratic vote and a member of the electoral college who will vote for Mr Biden to become the 46th president of the United States. He also addressed the Democratic National Convention in August.

“We had people inspired to vote. I sat down with the DNC chair Tom Perez and let me that they didn’t do so well in the last election because they took the native American vote for granted.

“I told them that they needed to go into tribal nations to encourage and inspire a big turnout.

“We are proud that the Irish people are friends of the Navajo people They assisted us when our federal government would not.”

The Navajo gofundme page can be found here: www.gofundme.com/f/official-navajo-nation-covid19-relief-fund