McEntee’s plan to answer questions over Woulfe described as ‘insufficient’ 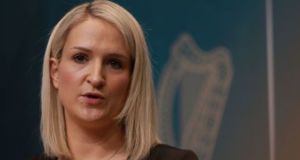 Minister for Justice Helen McEntee came under sustained criticism on Friday over her plan to face questions on the Seamus Woulfe affair, which the oppoisition branded “grossly insufficient”.

Opposition parties are resisting her efforts to address the matter during oral PQs, arguing it will constrain and curtail questioning, and demanding instead a full statement and significant time for questioning.

They have refused to facilitate requests to swap speaking time to do so, including request for a schedue that could have seen her address the issue shortly before 10pm next Tuesday.

In a broadcast interview on Friday night Ms McEntee defended her approach to taking Dáil questions on the matter, and her handling of Mr Justice Woulfe’s appointment to the Supreme Court. However, she appeared to contradict a statement given to The Irish Times by her cabinet colleague, Eamon Ryan, on whether he was made aware of other applications for other judicial positions filled by the Government.

Asked on RTE Six One News about whether she shared names of judges under consideration with senior colleagues, including Mr Ryan, she said sometimes she gave a single name but “in other instances I have given more than one name”.

Mr McEntee’s spokesman said he had nothing to add to her comments. Mr Ryan and his spokesman did not respond to calls on Friday.

Ms McEntee rejected suggestions she had been hiding from the Dail, and said there was an inference to some criticism that she was not capable of doing her job as she had only been in the role three weeks when the Woulfe recommendation was made. She said there was a “clear process” which she had stuck to and had done her job correctly. She said that in the case of Mr Justice Woulfe, she gave one name to senior colleagues and then to cabinet.

Sinn Fein, the Labour Party and the Social Democrats all rejected efforts to swap speaking time, saying they would only settle for a full statement to the Dail followed by a question and answer session.

Mattie McGrath, leader of the rural independent group, wrote to the Ceann Comhairle saying anything short of a full question and answer session would be “grossly insufficient and an affront to our democracy”.

Earlier on Friday, Ms McEntee’s refusal to engage in a more extended session drew comment from coalition colleagues. Fianna Fáil TD Jim O’Callaghan, the told The Irish Times that his Coalition colleague should address the matter in the same way as minister have before, and “has nothing to fear in answering [OPPOSITION]questions in the same way as other ministers have done in the past”.

“Helen McEntee is a very capable and competent politician who is well able to answer questions from the Opposition in the Dáil,” he said.

Fianna Fáil Senator Lisa Chambers said on Friday “I don’t know why that particular format has been taken, I was a bit surprised, to be quite honest. I would have expected statements and then questions to follow up,” she said, adding that addressing the issue during oral PQs “does curtail to a certain extent the ability of members to ask questions”.

Ms Chambers, a former TD for Mayo, told the show that she was “surprised” Ms McEntee had chosen not to engage in a full question and answer session, She said the issue may ultimately be satisfactorily addressed during oral PQs, but added: “I do think there are genuine questions that have to be answered because people are asking them, and it is a political issue that’s not going to just go away and it will be dealt with, and dealt with head on.”

She also suggested that some of the issues that needed to be addressed may pre-date Ms McEntee’s time in the Department of Justice, and that the department’s former minister Charlie Flanagan could “shed a little bit of light” as might the then taoiseach Leo Varadkar. “I think those two gentlemen probably have more answers than the current Justice Minister,” she said.

During oral PQs, which must be taken by all Ministers giving an account of their work in the portfolio, questions are submitted in advance, and can be grouped. The Opposition has also argued that it will limit the capacity of the smaller parties to put questions to the Minister.

Cian O’Callaghan, the Social Democrats TD for Dublin Bay North, said the proposal “falls far short of what is required. This is a limited format that excludes some parties and groupings. This means that many of the questions that Opposition TDs want to raise will go unanswered.”

He said the move is “an attempt by the Government to avoid scrutiny. Oral questions is a routine format which will not allow for the level of scrutiny required.”