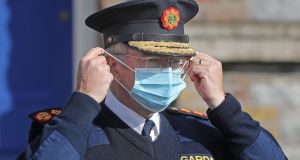 The public are complying with Level 5 Covid-19 restrictions to a “high level” Garda Commissioner Drew Harris has told the Taoiseach Micheál Martin.

Mr Martin met Mr Harris at Government Buildings on Friday to discuss the enforcement of rules, regulations and guidelines arising from the pandemic.

The Taoiseach was accompanied by Minister for Justice Helen McEntee and Minister for Health Stephen Donnelly.

Also on the agenda was looking at policing arrangements that might take place in December, in the event that restrictions are eased downwards from Level 5.

Following the weekend street drinking, Mr Donnelly proposed new laws to ban pubs selling take-away alcohol, and then to fine those meeting in groups of more than two people. The proposals were withdrawn before the Cabinet meeting began on Tuesday.

The Government spokeswoman said the meeting with the Garda Commissioner had been positive and constructive.

“The Commissioner briefed the meeting on the current high levels of public compliance under Level 5 and the meeting discussed the issues for enforcement in the context of any changes that might arise in December.

“The Taoiseach expressed the Government’s gratitude to the members of An Garda Síochána for their ongoing work in support of public health restrictions,” she said.