‘He is as fit as a fiddle,’ says daughter of man celebrating 100th birthday 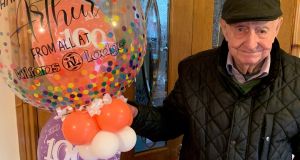 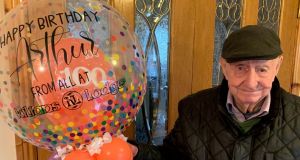 Covid-19 restrictions may have put a halt to Arthur Henry Saunders’ gallop but as neighbours in Mullagh, Co Cavan surprised him on his 100th birthday on Friday, he promised to have “a bit of a do” when restrictions ease.

Described by his granddaughter Julie Norris Brady as a “people person”, the Athlone native was shocked when he answered a knock on his front door at lunchtime to see friends and well-wishers led by gardaí staging a drive-by in his honour.

“I got loads of presents – whiskey and cash”, said the 100 year old who was also presented with an elaborate birthday cake baked by neighbour Audrey O’Rourke.

“He is as fit as a fiddle – he still mows the lawn for me,” said his daughter Ann Marie who shares a home with the 100 year old in the Millstream estate in Mullagh.

“Covid has hit grandad hard as he is a people person and very popular around here ,” explained Julie. “He has gone from walking to the shops every day for his paper and messages to hardly going out at all since March.”

Julie lives three doors from her grandfather and her home is officially part of his bubble so Arthur drops in for a cup of tea every Saturday to swap news with his great grandchildren Lauren (18) Jamie (16) and Ben-Henry (11).

“They walk his dog for him every day. He’s so popular everyone would stop and chat to him so we can’t risk it with the virus”,said Julie.

Arthur himself who was born during the War of Independence and emigrated to England during the second World War, says he is hoping the pandemic ends soon so he can get out to meet his friends.

Having emigrated to England in 1941, he worked for decades on building sites and on the railways and says he had a good life there.

“I met a lot of good people there. Thousands of Irish went over during the war as there was no work at home,” said Arthur. One special Irish emigrant he met was his future wife Teresa Clarke, a native of Trim who passed away some years ago.

The father of three who has seven grandchildren and seven great grandchildren says he is fit as a fiddle. Last year he was chosen to turn on the Christmas lights in Mullagh and he is hoping that that there will be some festivities again this Christmas. “I’m a good mixer. I love meeting people”.