History of Cork’s Jewish community to be commemorated

‘The Tsar, the Rosehills and the Music Shop’ opens this month at Cork Public Museum 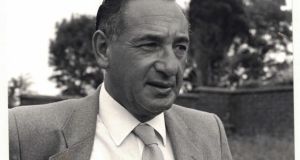 Fred Rosehill: “In the heyday of Cork Jewish life, he showed up first and departed last.” 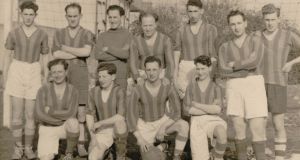 A Cork soccer team made up of Jewish members photographed in 1952.

The Jews of Cork may have lost their synagogue last year but the story of how Leeside became home to a small, thriving Jewish community in the early half of the 20th century is about to be chronicled at a new permanent exhibition at Cork Public Museum later this month.

Entitled “The Tsar, the Rosehills and the Music Shop”, the exhibition, which will be opened by Cork born film maker, Louis Marcus, tells how Jews, fleeing persecution from the Imperial Russian territory of Lithuania in the late 19th century, arrived in Cork and made it their home.

Aileen O’Connor of West Cork company, Heritageworks, which helped organise the exhibition, explained that it traces the growth of the Jewish community in Cork from the 1880s through to its decline when in 2016 the synagogue on South Terrace closed due to lack of the lack of a quorum.

“From the 1880s over two million Jews, fleeing pogroms and persecution, left Tsar Alexander II’s Russia, making their way towards the United States. A tiny number disembarked at Cobh, some say their broken English led them to think the cry of ‘Cork! Cork!’ was a call for ‘New York’,” she said.

Louis Marcus’s grandfather, Louis Goldberg was one of those who disembarked in Cobh, arriving in Ireland in 1882 aged just 14 while amongst the others was Ernest Rosehill, who ran ‘E Rosehill & Sons, Music Stores’, selling sheet music and gramophone records on Patrick Street in the city.

“Most of the new arrivals started off in ‘Jewtown’ near Hibernian buildings in Albert Road with many becoming door-to-door peddlers, selling household wares and holy pictures and were known as the ‘Vicklemen’ in Yiddish, or the ‘Weekly Men’ as their door-to-door rounds took a week to complete.

“By 1939 there were almost 400 Jewish families in Cork, with an active synagogue, sports and drama teams and two football team but as they flourished, their children became educated professionals and moved abroad for greater opportunities and the chance to join larger Jewish communities.”

Among those who stayed was Ernest Rosehill’s grandnephew, Fred, who, as most of his peers emigrated, took on the task of keeping the synagogue and community alive, even flying in young Rabbinic students to make up the quorum needed to conduct Jewish faith services.

Such was Fred Rosehill’s dedication to his community that when he died last year, Maurice Cohen, of The Jewish Representative Council of Ireland said: “Freddie Rosehill was there for it all – in the heyday of Cork Jewish life, in the mid-century and later on – he showed up first and departed last.”

The Tsar, the Rosehills and the Music Shop – the story of Cork’s Jewish Community 1880s to 2016, developed in conjunction with Fred Rosehill’s daughter, Claire and the Cork Hebrew Congregation, opens at Cork Public Museum on May 26th.