New French President Emmanuel Macron, in his inaugural address on Sunday (May 14), pledged to build a "strong and confident" France he hoped could become one of the 21st century greatest powers and fully play its part in European and world affairs. 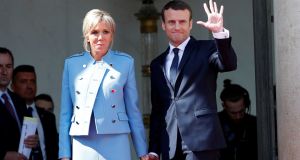 French President Emmanuel Macron and his wife Brigitte Trogneux wave to French President Francois Hollande as he leaves after the handover ceremony at the Elysee Palace in Paris, France. Photograph: Christian Hartmann/Reuters 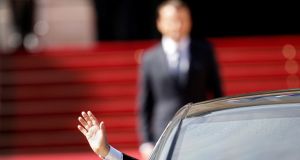 Centrist Emmanuel Macron took power as president of France on Sunday in a sumptuous inauguration ceremony in the Elysee Palace presidential residence in Paris following his May 7th election victory.

On arriving for the ceremony at the 18th century palace, Mr Macron (39), a former investment banker and economy minister, held a private meeting with outgoing Socialist President Francois Hollande on state affairs which included the transfer of access to France’s nuclear missile launch codes.

Mr Macron becomes France’s youngest post-war leader and the first to be born after 1958 when President Charles de Gaulle put in place the Fifth Republic.

He officially became president when Laurent Fabius, chairman of the constitutional council and a former prime minister, read out the results of the election in which Mr Macron beat far right leader Marine Le Pen.

In one of his first appointments, Mr Macron named Alexis Kohler as secretary general of the Elysee palace, the most powerful role among presidential staff, while career diplomat Philippe Etienne was named as his top foreign policy advisor.

Mr Kohler, a 44-year old graduate of France’s elite ENA administrative school, was Mr Macron’s chief of staff when the incoming president was economy minister and has worked for the Treasury.

He will be Mr Macron’s right-hand man, the top official in the Elysee administration and a key political advisor who is typically the main contact point for ministries, parties, unions and business leaders and plays an important role in crafting policies.

Mr Etienne, a 61-year old former ambassador well known both in Brussels and Berlin, was appointed to be the incoming president’s diplomatic advisor, Macron‘s staff said. Also an ENA graduate, his nomination was immediately saluted in the EU capital.

“This is very good news. Philippe is an authority on EU affairs and a promoter of Franco-German friendship,” Martin Selmayr, the head of cabinet for European Commission President Jean-Claude Juncker, said on Twitter.

The news was also welcomed among French diplomats. “He is extremely well aware of EU affairs,” one senior diplomatic source said, calling him a skilled negotiator.

The appointments were announced as Mr Macron readied for his inauguration as president at the Elysee palace.

Mr Macron will name a prime minister on Monday and the new government will be announced on Tuesday, a source said.